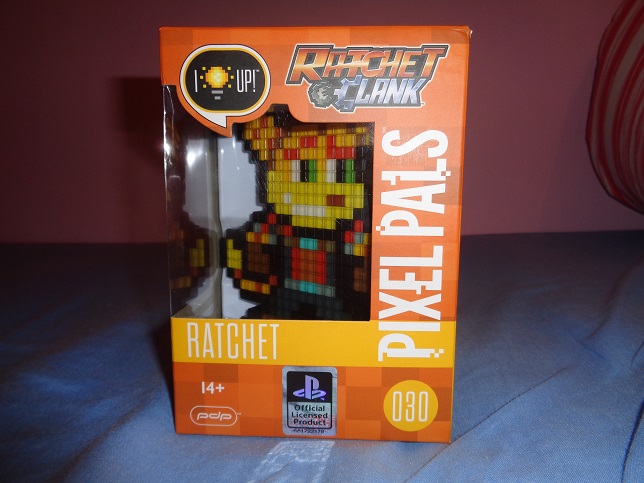 Ever since 2017 marked the 15th​​ anniversary of the Ratchet & Clank series, Sony and Insomniac Games collaborate with other companies to churn out brand-new merchandise in order to celebrate the aforesaid anniversary ranging from spanking new merchandise from ESC-toy to the recent Pixel Pals Ratchet which is a part of the Pixel Pals brand created by PDP (Performance Designed Products LLC).​​

The transparent part of the box is a bit creased probably during transit.​​

While I​​ was window-shopping at a GAME store in the Arndale Centre, I came across new collectible products on the store shelves known as Pixel Pals of other characters. I didn’t know who the company is, let alone the name of it until I visited the official website​​ that created the aforementioned Pixel Pals which revealed to be PDP. However, I didn’t give a hoot about them whatsoever… that is do my eyes deceive me or I see a Pixel Pals Ratchet in the picture in a random tweet on Twitter? This caused me to look for it on the official PDP website, Amazon, Ebay and in both the GAME retail shops in the Arndale Centre and the Trafford Centre. Sadly, the Pixel Pals Ratchet isn’t available in the Amazon UK and Ebay UK websites as well as the GAME retail stores. Seeing as this is a new piece of Ratchet & Clank merchandise, I wasted no time to import it.

What are Pixel Pals you may ask? They’re characters from your favourite video game franchises, movies and comic books in 8-bit form and they can act as any source of light you​​ wish. In my opinion, they’re more useful than the Funko Pop Figures because they’re multipurpose and they’re adaptable in any household room or they can serve as Christmas tree decorations. At the back of the Pixel Pals is a button that allows you to switch them on or off.

Each Pixel Pal possesses an on/off switch in tandem with a panel underneath it.​​

I’ve yet to test it as a makeshift desk lamp but since there is no room in my bedroom at the moment; I made the decision to turn it into my portable bathroom light instead. ​​

Behold my new bathroom buddy, lighting up my life with his presence!

I wanted to find out and see if I can get multiple uses out of it besides using it as merely a collectible and I’m surprised it’s very versatile upon using it, especially when it can be whatever light I desire it to be whether it can be a makeshift desk lamp, a bathroom light, a night light etc. Since the bathroom light seemed to be broken beyond repair, I tested it in the bathroom and lo and behold, it took me aback due to how bright it is. Unfortunately, it’s not vivid enough to bathe the whole bathroom in its light. Nevertheless, it’s been my new bathroom light ever since it finally arrived at my doorstep after being stuck in customs for who knows how long.​​

Right side of the box depicts Ratchet’s appearance when lit up and when shut down.​​

My complaints are the Pixel Pals Ratchet didn’t include with two AAA batteries​​ and a USB charge, a plug socket charger or an internal rechargeable battery, Pixel Pals Ratchet isn’t available to purchase anywhere in the UK (not even on the Amazon UK and Ebay UK websites) so I have no choice but to import it from Amazon US, this took ridiculously long to reach my home, the design of the Pixel Pals Ratchet doesn’t match with the artwork shown at the back of the box and vise versa, the Ratchet & Clank logo, the Insomniac Games logo and the official artwork of Ratchet (the abovementioned artwork is from Ratchet & Clank: All 4 One) are outdated, the transparent part of the box and the bottom left corner located below the box are a little bit creased upon showing up at my home and PDP didn’t answer my e-mails at all or send me a free Pixel Pals product upon request and Pixel Pals Ratchet (or any of the Pixel Pals, for that matter, can’t be shipped worldwide from the official PDP website).

Bottom left corner of the box is a teeny bit damaged maybe during shipment.​​

In conclusion, in spite of​​ my countless nitpicks, any Pixel Pals is worth an investment and it’s perfect to lighten up your mood (excuse the pun) but this begs the question: are the Pixel Pals worth anything down the line? Well, it depends on you and how long you’re going to make use of them. In fact, they are more affordable than The Stubbins if the prices of the Pixel Pals are anything to go by. If you’re in the market for affordable merchandise of your favourite franchises or you’re planning to purchase a Pixel Pal to transform it​​ into any light you choose, then look no further.

A description of Ratchet about his role in the Ratchet & Clank series and his personality.​​

Whether I’m planning on collecting the other Pixel Pals characters or not is still up in the air and considering​​ how I view Nintendo in a negative light nowadays, the probability of gathering up more is unlikely. However, if PDP and Sony are willing to release Pixel Pals of Clank and the other characters from familiar PlayStation franchises such as Spyro The Dragon,​​ Crash Bandicoot, PaRappa The Rapper, Jak And Daxter and Sly Cooper then I might change my mind. ​​

I hope there will be a Pixel Pals Clank in the future because you can’t have one without the other.

Here are the links below to where you can purchase your very own Pixel Pals Ratchet: