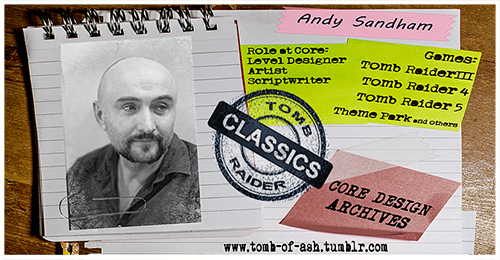 Andy Sandham was involved in majority of Tomb Raider games by Core Design. He was an artist, level designer and a scriptwriter throughout his work on Tomb Raider series. And today he kindly agreed to an interview with me. Hello Andy, thank you for agreeing to have Q&A with us.

You had a great level of involvement from Tomb Raider II until Tomb Raider (5) Chronicles.  Which was your favourite game that you worked on?

Tomb Raider 3 – we really pushed the boundaries of what the PSONE was capable of, and there was a healthy sense of competition in the team. I also created the London level, which allowed me a lot of ‘research time’ in London, if that’s the right phrase. I still recall standing in tube stations with my breeze block sized digital camera taking photographs of the floor and walls for textures!

Croft manor has always been a great training area for beginners and veterans alike to establish the new skill sets each game had.  Previously we have read that Croft Manor was inspired by Kedleston Hall however we have personally gone there and it does not have that many similarities.  Having been in Darby and outside the original Core Design building, we noticed many of the buildings were brick with white edging and had architectural similarities.  What inspired the look of Croft Manor really?

I’m uncertain what Toby’s (Toby Gard) original inspiration was – although, yup, It did bear a few similarities to the original Core building – without the hidden quad bike track, of course.

If memory serves, I think we began to try and build the tutorials into the levels – as per the Werner Von Croy intro section out of Last Revelation – so that we weren’t doubling up work. As a side note, that tutorial sequence with Werner Von Croy still gives a number of us re-occurring nightmares – companion AI in those days was a relatively new thing, even if Werner was (supposed to be) on a fairly linear path… Myself and Tom (AI coder) battled through this day and night for a number of weeks — although I think if we hadn’t already cut our teeth with the nightmarish baptism of fire ‘Sophia boss battle’ from Tomb3, one of us may have ended up leaping out of a window. I think we’re both still catching up on sleep from that one…

We noticed right next to the old Core Design building there was an office building called “Croft House”.  Was Lara Croft’s last name inspired by the building next door or is the “phone book” story true on how her name was chosen?

Nope, neither. Lara was originally Lara Cruz as created by Toby, but I believe the boss wanted something more English. Toby and the original scriptwriter, Vicky (Vicky Arnold), came up with ‘Croft’, as being quintessentially English.

In Tomb Raider (4) Last Revelation we get to see Lara Croft as a young girl going on one of her first adventures with Von Croy.  How did you come up with the concept and story to involve her younger and being guided by someone?

As above, this was to integrate the tutorial ‘seamlessly’ into the game. Obviously didn’t work out quite that way, though!

Our hero, Lara Croft, has been known to save the world a few times.  She saved it from power hungry Natla who was going to release an Atlantean race of beasts, Bartroli who was releasing a dragon, and Dr. Willard who was trying to accelerate evolution.  In Tomb Raider (4) Last Revelation suddenly Lara Croft is the one leading the world to the apocalypse by reading the Amulet of Horus.  What made the team decide to make Lara make this critical mistake?

The Core team all sat down together to outline the story for Tomb 4 (which I scripted, as no-one else wanted to do it), and it was kinda decided we needed something new – the ‘revelation’, so to speak. That’s where the plot device originated from.

What was the reason to make it seem like she died?  Was this a plot-based move (such as a cliffhanger to have Tomb Raider advance to a new console) or perhaps did Core feel this was the end of the Tomb Raider franchise as a whole due to a dip in sales?

Jeremy and Adrian (our bosses) were very much hands off with regards what we wanted to do with the games  – other than ‘greenlighting’ settings, etc. – We were all a little sick of Lara, and decided killing her might give us a chance to move onto a new project.  Didn’t work – although in hindsight, I’m amazed how much freedom they gave us – these days, If you proposed killing Lara croft, you’d probably end up sleeping with the fishes…The joys of a small team are coming back though, via indie projects…

Clearly, a ton of research on ancient Egypt and its mythology went into Tomb Raider (4) Last Revelation.  How did you go about researching for all the levels?

Jeremy (to his credit) actually decided we needed to set 4 back in Egypt – to get Lara back to Tombs – and generously planned a trip out there for all of us – unfortunately, with the deadline rapidly approaching, and a number of inoculations required with specific time periods before they took effect, meant  another trip to London instead! We all spent a lot of time in the British museum, and trawling around the bookstores on the street opposite for the books with the most photographs of textures in! It was always a highly sought after prize – the book with the most textures that we could scan in. (I should point out the internet was still relatively useless with regards resources at this point)

In Tomb Raider (4) Last Revelation we all were introduced to the ability to walk back to the previous level despite our advancement to the next.  How did this idea come up?  Was this something that was thought of early on and could not be done due to technological limitations or was this a new idea for the game series?

We were all keen on a ‘hub’ and more player choice so that if the player was stuck in one area, they’d be able to try another without getting frustrated – what now would be referred to in poncy ludological terminology  as ‘player agency’

Tomb Raider 5 was based around the levels we originally pitched for Tomb 4 – Jez (Jeremy) told us he wanted Lara ‘back in some fucking Tombs!’ – hence Tomb 4 being set in Egypt.

As a level designer what was your process to turn concept into reality?  Did you physically draw out maps or diagrams to aid in creation?  Do you have original concept art you would like to share with us? (UPD. Andy sent us some concept art)

Yup, very much a case of thinking of an area you’d like to tackle (like the London Underground), then drawing out rough sketches of the layout and what you wanted Lara to achieve at the end of each level (funnily enough, I found some of these just the other day…), and then a lot of time working my way around puzzles, and then off to collect the textures using my trusty gigantic digital camera!

I’d note that around tomb 5, creating original puzzles was becoming pretty difficult, and I worked out a number of systems with which to formulate new puzzle concepts – a number of which I’m now teaching my award winning Design students within my puzzle design course at NHTV school of international game architecture and design (IGAD)*

*(please note this is a plug) (please no we included it 😀)

Was it a coincidence that there was a Russian sub by the name of Kursk that sunk in the Barents Sea a few months before the release date of Tomb Raider (5) Chronicles which included a Russia level with similar themes?

This was Joby’s (Joby Wood) level – I’m unsure if this event was related, although I do know Joby had an enormous pile of books on his desk focussing on the ‘spear of destiny’?

In concept form and even once the script has been written there are many differences to the completed project.  What are some of the notable changes on the games you worked on from concept to finished project?

Tomb Raider three was interesting as we kept pushing the boundaries – one of the coders would shout ‘Hey, I’ve got a quad bike working!’ or something similar, and we’d all crowd around and then start working out ways to get these new systems into our levels. I still distinctly remember, at least once a week, asking Chris (Coupe), one of the programming leads, for some new feature I wanted to make my level better, to be told quite categorically to ‘fuck right off’. Without fail, two or three days later, Chris would call me over with the feature implemented and say ‘Happy Now’? We had some world class (although potty mouthed) talent on that team.

Have you played the newer Tomb Raider games by Crystal Dynamics?  What are your thoughts on them?

Yup, been playing the new ones – Some really nice work here. And I do love the way they’ve taken some of the core features and revamped and upgraded them (i.e. the vine climbing becoming the ice hook walls, and the zip lines you’re able to shimmy back up). It’s all building on what was originally a simple, clean, genius concept within the original Tomb Raider.

As the scriptwriter and as a level designer you had a lot of say in the feel of the Tomb Raider classics.  How do you feel about the direction the story of the new games has taken?  What would you have done different?

I actually correctly predicted that the series may try for a bit of ‘survival horror’, as the solitary nature was something that made the original so unique. With regards the script on the new game, I’m not entirely convinced – I feel they were going in a particular survival horror direction, and then lost their nerve. Very much a ‘Hills have eyes’ and ‘Deliverance’ vibe, became ‘Bear Grylls with a crossbow’…

How do you feel about the level design of the new games?  What would you have done different?

I’m impressed! You’re guided along the critical path in such a way that you actually feel as if you’re exploring – a vitally important aspect as a player motivator within these games. It’s really a case of drip feeding setpieces, spectacle, and awe inspiring moments as player motivators – which they do well.

In theory if you had your team then with the same projects with MODERN technology what advancements in level design would you take advantage of?  What ideas you wish you could have used were thrown out because of technical limitations?

Lara croft floating in orbit, surrounded by the wreckage of her broken satellite, attempting to find a way back to Earth whilst utilising the canny guidance of George Clooney? Joking aside, with regards advancements in level design, I teach a number of subjects within this field, and wouldn’t say there are many MAJOR advancements – it’s just knowing the techniques on how to motivate and reward the player while providing the right amount of challenge. So, in a nutshell, just knowing how to do it right in the first place!

Thank you very much for your time!

It’s been a pleasure.

AshKa/Fiend for Lara Croft in Russia. Read this article in Russian

Special Thanks to Tatiana Leitzel.

READ PART II OF THIS INTERVIEW

UPLINK Presents: Tomb Raider at 25 with Tomb of Ash