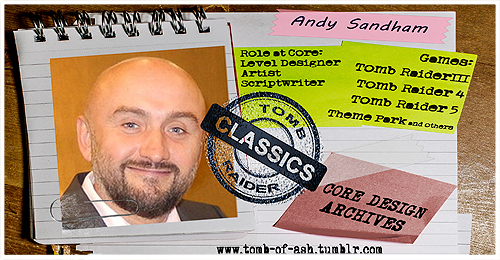 Since my interview with Andy Sandham was published it received a lot of popularity and feedback. Because of all the feedback we received I wanted to open our next layout of questions to the Tomb Raider community. Here are their questions for Andy Sandham. In early magazine previews it was said that Tomb Raider III would feature a higher resolution and groundbreaking graphics This also said it would contain up to 3 routes of completion (majority of these routes were taken out), Could you give us a bit more information about this and why it never made it into final release?

I believe the optional routes were taken out due to time pressure – as our first Tomb Raider game as a team, we were really up against it, learning new tech, etc., so I believe we held out on the ‘hub’ system until tomb raider 4 to prevent ourselves from having nervous breakdowns! With regards the graphics, I believe the coders implemented triangulation on the blocks (which caused a variety of control nightmares including plenty of Lara riverdancing) which allowed us as designer/artists to create more ‘organic’ shapes. Although I should point out this didn’t seem to help out too much with my accidentally ‘cubic’ version of St’ Paul’s Cathedral… I should also note that according to the coders, the lighting was vastly improved – may have been dynamic lights? Difficult to remember!

In Tomb Raider III beta version it is possible to see Peru on the globe. Why the level was cut out from the game and what was its original purpose? It was said that the first level would be there to explain the storyline and then the player would be able to choose where to continue their adventure from a set of four locations. Was Peru actually the original first level?

I remember that Heather, level designer and artist on Tomb 2 had built most of Angkor Watt – but that team were offered their own project (project Eden?) and so jumped at the chance, leaving us with a ¾ complete level that was handed over to Jamie Morton. Uncertain about Peru, but I do remember we discovered a day or two after the game shipped that as soon as you started on the mud slide in that level and jumped left super quick, you would end up at the end of level trigger! This, understandably, caused some concern…I’m uncertain if we fixed this, or if it’s still in the game…

The UFO in the Area 51 level is much bigger on the inside than the outside. Was Dr Who’s Tardis an inspiration to this? And how this effect was achieved in the game?

Yup, our little nod to Dr. Who – with regards achieving it, the doors in the tomb raider editor were effectively portals that sent Lara in to a new BSP– I think there was a lot of fiddling with that room so that the wall normals were only visible from the inside, although I’m uncertain if it lived in the same space or if we teleported Lara to a different area. In the dim recesses of my tired old brain, I do remember us having some issues with this area.

Why was there a sphinx in Lud’s Gate? Was it meant to be a duplicate of the one from Sanctuary of the Scion?

Yup, a nod to that classic chamber – the cutaway camera in that level was one of the first major elements of cinematic ‘spectacle’ I had seen in computer games – and I wanted to replicate it. Never as good as the first time, though!

Why was All Hallows (Tomb Raider III) made as a bonus level and not included in the main game? It seemed like it was on early screenshots. Did it have a different purpose in the beginning and story to go along with it?

I believe I originally made this as part of the inside of St. Paul’s, but due to memory, I couldn’t fit it in. I also remember It was insanely difficult, I made the bloody thing and could only just complete it…saying that, I picked up Tomb 3 again the other day to have a look – started playing the London level (which I built) and couldn’t get off the first roof without dying repeatedly. We weren’t so keen on the game concept of ‘on-boarding the player’ in those days.

All Hallows in Tomb Raider III Alpha and Final release

Eventually, Lara discovers a small Masonic temple when she explores Aldwych. Why is it there? Also why Aldwych was chosen as a location in the first place?

Aldwych was chosen as a location as I was interested in abandoned tube stations at the time – there are a number under London, although I have a sneaking suspicion Aldwych has now re-opened. I’m actually heading that way next week, so if it is, I’m going to take a look and see if I’m able to find any gangs of giant rodents, etc. With regards the Masons, I wanted to try and get in as much ‘London lore’ as possible in that area – and I should also point out I was also obsessed with geographical accuracy, so I wanted to make sure the locations were all plausible and ‘reachable’ from one another – something I believe adds to player immersion.

What inspired you for Irish levels in Tomb Raider Chronicles? Why was Ireland chosen as a location?

I’m big on British folklore, and Ireland seemed a good choice for all kinds of mysterious goings on, perhaps also inspired by my growing up in the Highlands of Scotland, and spending a lot of time walking out on the Isle of Skye, visiting Iona and Staffa, etc.,and being scared by things going bump in the night!

In the PC version of Tomb Raider Chronicles it comes with a level editor. Now the level editors community grew to huge proportions. A lot of its aspects were even improved by the fans. Is the level editor similar to the software that you used to create levels? Did you play any custom made levels?

I had a look at this the other day with a view to walking my students through the processes of early level design in action adventure titles. From what I could see, this was pretty much the editor we used day to day. With regards custom made levels, management (Adrian) would, I believe, play a number of these, and would show us some of the better ones, yes.

FMV version of Lara’s manor in Tomb Raider I is slightly different to the one in Tomb Raider II (where you can actually go outside). It looks strikingly similar to Compton Wynyates (which is in Warwickshire, near Derby). It even features the painting of the horses that Lara has in her main hall. Was this indeed the original inspiration for it?

I’m still uncertain of Toby’s original inspiration –although with regards the painting of the horses, this may simply be down to this texture being available in the book we were scanning for textures that day! Sorry I can’t be of more help – I’ll see what else I’m able to dig out, as I’m seeing some of the original team next week.

Ashka/Fiend for Lara Croft in Russia.

(Read this article in Russian)

Special Thanks to Tatiana Leitzel