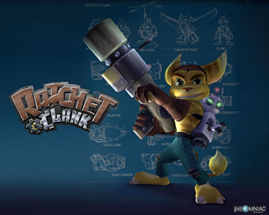 Ratchet & Clank: Back To The Beginning

Ratchet & Clank: Back To The Beginning

“London, let’s go back to the beginning!” – Cheryl from​​ Girls Aloud Out Of Control: Live From The O2 2009​​ DVD before the “Sound Of The​​ Underground” live performance

We all have a particular video game that catapulted us into the first foray of any series. For example, Crash Bandicoot (not Super Mario 64 and the Nintendo 64, mind you) marks my first foray into the Crash Bandicoot series and video games in general. Thus, it turns out the PlayStation 1 (otherwise known as PSOne or PSX back in the good old days) is my first ever console according to Power Up! Manchester 2017 at the Museum of Science and Industry. In light of the upcoming 15th​​ anniversary of the Ratchet & Clank series, I decided to reveal how I got hooked on it in the first place as well as discussing about the first Ratchet & Clank game I purchased, played and owned, Ratchet & Clank 2: Locked and Loaded (also known as Ratchet & Clank 2: Going Commando in the US).

It all started back in Thursday 21st​​ August 2014 at 7:52pm when a former friend and I were engaged in a private conversation on Facebook. We talked about all kinds of things ranging from video games to our interests and it seemed to last for hours on end until he introduces me to the Ratchet & Clank series, in spite of I already know of its existence years ago. From what I can vaguely remember, what intrigued me is he told me the series is a “spiritual successor” to the Spyro The Dragon franchise. At first, I’m still stubbornly hesitant to try out the series but when he informed me that platforming is the meat of the aforementioned series, that’s when I eventually surrendered and made the decision to give it a try.

My love for the series started all because of a conversation.​​

One discussion led to another and the next thing I knew, I began curious about the series.​​

Flashback to Saturday 11th​​ October 2014, me and my former long-time best friend attended Play Expo Manchester which marks as the first Play Expo we’ve experienced. Back when I dressed up as a hippie and my former life-long best friend cosplayed as a character from Attack​​ On Titan. I didn’t understand the aspect of cosplay, despite I knew about it years ago. During our time at the convention, we attended a talk about Oddworld: New ‘N’ Tasty, we met a few members of the developing team behind Oddworld: New ‘N’ Tasty, Just Add Water Ltd., I had my pictures taken with them and getting their autographs, I tried out a demo of Oddworld: New ‘N’ Tasty on the PlayStation 4 (it’s an old model at the time), we watched the cosplay masquerade, we stumbled across and took photos of cosplayers, we visited GamesYouLoved’s stall (that’s before I joined their writing team at the time), we stopped by at the other stalls such as the Video Game Carnival and so forth until we eventually come across one of the retro video game stalls. As luck would have it, I stumbled upon a copy of​​ Ratchet & Clank 2: Locked and Loaded​​ and bought it. Little did I know I didn’t know what I’m getting myself into? And from that point on, the rest is history.

What baffles me is how this game can get away with a cuss word on the back of the case while it’s rated PEGI 3+.​​

Believe it or not, an innumerable amount of years ago, I’m actually aware of the series but that’s when I weren’t​​ interested in it. In fact, the third-person shooting gameplay have utterly put me off the entire series for numberless amount of years… until 2014.

I still regret judging the series for many years back then as well as not knowing about it in 2002 since it’s completely overshadowed by Girls Aloud and the like at the time while I’m still in high school. If only I’m aware of the series beforehand all these years ago… I wouldn’t have it any other way. Though, it would’ve made my life even more interesting if I​​ grew up with the series along with Girls Aloud, Sugababes, S Club 7, Rachel Stevens, Crash Bandicoot, classic Spyro, Tomb Raider, old-school Cartoon Network, Blue (not to be confused with the name of the colour Blue) etc during my teenage years. Looking back, I realised I took the early and mid 2000’s for granted.​​

After all these years of dismissing this series and not giving it a second chance without a second thought back then made me fail to realise how undeniably cute and cuddly Ratchet is, despite his previous unlikeable personality in the first game and how unkind and mean he is towards Clank sometimes in Ratchet & Clank: Size Matters and Ratchet & Clank: Tools of Destruction. I find it unique to find a​​ protagonist who isn’t always a goodie two-shoes, coupled with a bitter, selfish, self-centred, arrogant, street-smart and smart-mouthed personality traits when it comes to the first game as far as the original series is concerned, excluding the 2016 re-imagining.

Becoming fascinated and admittedly, borderline, obsessed with the Ratchet & Clank series have opened doors to new possibilities, led to me expanding my horizons by playing other non-Nintendo platforming games, giving other things a second chance such as potatoes (coincidentally, I tried potatoes in the same year as I’ve eventually given the Ratchet & Clank franchise a second chance), a brand-new pastime in the form of stargazing and slowly warming up to some video game genres and video games such as​​ Hyper Sentinel​​ for instance but at the cost​​ of starting to grow out of/move on from Nintendo, Mario, Kirby and Animal Crossing series (that’s an upcoming article for another time in the near future). The instant I become interested in a “new” video game franchise, there comes a sacrifice. Therefore,​​ it’s becoming more apparent when I play PlayStation games (mainly platformers seeing as they are still my bread and butter sine 1996) more times than I play Nintendo games and consoles nowadays. In other words, I prioritise PlayStation more than Nintendo​​ these days. I simply don’t like Nintendo as much as I used to. It happened with the Pokémon franchise back in the 90’s during the time when I played Pokémon Gold on my Game Boy Colour back in the day and it will be a matter of time before the same thing will happen to Nintendo as a whole. Although, it took years and years of baby steps to finally realise that maybe trying out new and different things isn’t such a bad thing after all. Not only that but I also come to the realisation that I’ve might have missed out on a lot of stuff throughout the previous and recent years.​​

Thanks to the Ratchet & Clank series, I secretly harboured a trigger finger but not to the extent where I’m going to try out the… (retch)… Call of Duty series and the Destiny video games.​​ And no, I don’t plan on checking them out whatsoever under no circumstances. The same can be said about The Legend of Spyro trilogy, ****landers (it’s extremely difficult to mention the “Skylanders” name without cursing it. It goes to show how much I loathed the franchise with every fibre of my being.),​​ Snake Pass​​ (in my opinion, I still reckon it’s not a platforming video game) and modern, generic and overrated AAA shooting games and open-world video games and nitty and gritty video games, complete with an excessive amount of blood and gore, to name a few. They’re SO not my cup of tea.

One of the memories I’ve recall is the weird glitches that plagued the game. They tend to happen at the most unpredictable times and they normally occur by accident when I​​ least expect it. Some are more laugh-out-loud hilarious than others. For instance, when I’m at Silver City in Planet Boldan, I was so engrossed in lighting the Thugs-4-Less mercenaries up with my high-tech, futuristic weapons I didn’t notice I shot at one​​ of the mercs, causing him to be pushed and edging him further and further into a transparent fence. No matter what I do and how hard I try, I can’t seem to do him in so I have no choice but to leave him where he is. It took me a while to become aware of what I’ve done and the instant I spotted him standing behind the barrier-like fence, it didn’t take me long to burst into laughter. Oh well, sucks for him that he can’t shoot at me now.  ​​​​

This is one of the funniest, accidental glitches I’ve experienced.​​

The other comical memory is within the first cutscene while Abercrombie Fizzwidget informs Ratchet of his commando training and conditioning duties and tasks which includes ballroom dancing, the slideshow presents me with a black and white picture of Ratchet dressed to the nines, clothed top to bottom in formal wear and Clank all dolled up in a dress whilst they’re dancing. I can’t unsee that slideshow photo ever since.