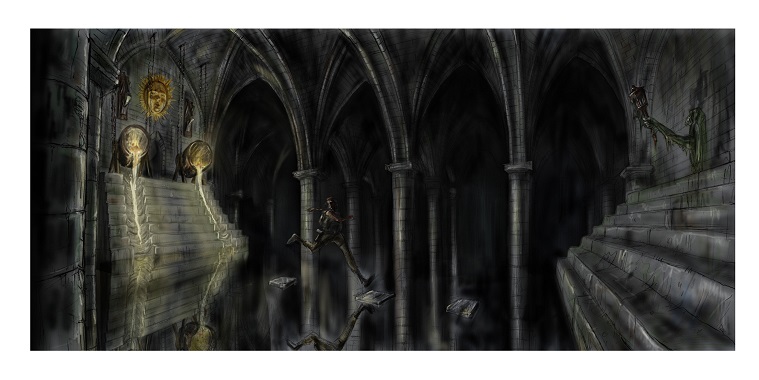 We’re publishing new set of documents regarding Tomb Raider: The Angel of Darkness. These were provided to us by Murti Schofield, the writer for the game.

We highly recommend you to visit our The Angel of Darkness section, Kurtis Trent Spinoff Game section and visit Tomb Raider: The Dark Angel Symphony.

Game VII will not be simply a continuation of Game VI, though the initial situations Lara faces will pick up from Game VI elements. To avoid any sense of doing a cheap rehash job new game/story elements will introduce great new challenges. Karel, the surviving Nephilim has retreated to his final base and stronghold in Cappadocia, the central region of. Turkey.

We will see more of Karel-ShapeShifter’s powers after having revealed himself as a Nephilim in game VI. Also look at how the final scene with K being ‘incinerated’ by the intense column of light/energy was more of a transformative reaction than an obliterative one. The alchemic maxim ‘Dissolve et coagulae’ destroy & reform, was in action here. Karel was being transmuted into…?…something else, something higher on the vibrational plane. What? Certainly something with augmented powers. To be explored. His ‘seduction’ attempt with Lara was a genuine offer. He could really have made use of her abilities which he recognised as outstanding.

What does the last of the Nephilim have planned and does it involve Lara?

Will we learn what has happened to Kurtis and will he appear in this game?

What about the other Cabal members who survived?

Gunderson could now be a super Boss standard baddy able to command hordes of armed squads or monsters for Lara to take out.

But the emphasis will be on action with puzzles, more classic TR territory. Lara’s enemies will include Nephilim, monsters, reactivated guardians of the city and Karel’s revived Cabal forces.

They end up in Turkey. They are at the heart of the underground cities [which actually exist in Cappadocia].

Karel has made his evil preparations here for completing the revival of the Nephilim race.  This is Nephilim home turf and Karel knows all the local traps and secrets. Also he is pretty damned powerful himself – having survived Game VI he has more special powers.

This part of Turkey is where the NEPHILIM SLEEPER from Game VI was dug up by Eckhardt. There may even be a couple of other SLEEPERS lying around – there were three originally.

Lara will have to fight her way into the underworld through a temple complex and into the subterranean levels including lots of flooded areas. Eventually she would reach Karel’s final base, a more hi tech area. His ultimate defence is the THREE REALMS or THREE REALITIES.

Karel-Nephilim has now been returned to his full Nephilim powers. The final confrontation involves a Nephilim defence system called the THREE REALITIES or THREE REALMS. This ancient system protects something big like:

This THREE REALITIES defence system projects any non Nephilim intruder into three deadly situations generated from their own fears. For Lara these are possibly:

Lara has to shut down each of her realities by locking a Periapt Shard in some crucial place or stabbing Karel or some other baddy.

*There are other possibilities that could be used including Lara being put into some possible future where the Nephilim race has been successfully revived by Karel and dominates life on Earth with all the horrors that implies for human beings.

*Another possibility could be back in Castle Kriegler.

Lara finally battles Karel and destroys the Nephilim installations and plans. Ends with a race to get out of the subterranean levels as it collapses.