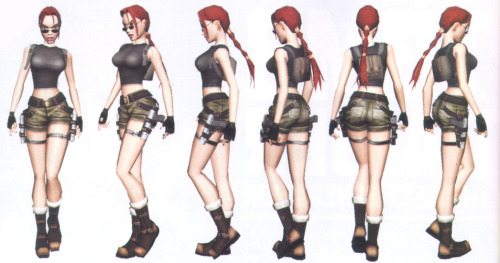 The Croft Times was the very first fan-made website. It was established in 1997 and we are happy to preserve and spread some of its invaluable materials. Luis Cunha, the creator of The Croft Times kindly gave us a permission to publish every material from his old website.

This article is related to the Angel of Darkness that was, at a time, known as “Tomb Raider Next Gen”

Next Gen Status Update
Lara in the next generation game
In the last couple of months some readers have expressed concern regarding the next instalment ofTomb Raider, the so called next generation Tomb Raider. Although Core Design isn’t prepared to release any more information regarding this game until later this year, we’ve decided to make a status update so that all the nonsense regarding the game will stop.

First, let us assure you that the game is being developed and will be released late 2002. This game is in development for about two years now and is being done by Core’s largest development team so far. The game’s development is on schedule and “we’re very happy with the results so far,” Susie Hamilton, Core’s PR Manager, told The Croft Times last week. “We can assure all TR fans that Lara will still be the same in the fundamental beliefs/morals/style/looks etc… just a whole lot better!!!” she added.
The latest official statements from Core were made at a press conference last February. At this conference, Core hinted several details about the game; perhaps the most interesting that it won’t carry the Tomb Raider title.

Certain rumours about the episodic nature of the game were also addressed by Core, who stated that new episodes will not be distributed on-line but that some game-related extras, like character bios and portraits, will be.

Next generation Lara Croft
Core also revealed some gameplay details, mainly that the game will feature some light role-playing elements like character attribute development. Rather than allowing the player to change or choose the characters attributes; some actions, like sprinting and other special movements, will become more effective the more they are used. This will allow that certain areas in the game will only be accessible by characters that have reached a certain proficiency level at certain attributes.

A new male playable character, whose name is not yet confirmed, will be introduced, although Core recently confirmed that this will not allow for multiplayer gamming. Not much was revealed about him or his relationship with Lara, but it was hinted that his motivations are similar to Lara’s.

Lara and her companion will be able to move through the environment in a much more natural fashion; Core has moved away from the traditional grid-based world and is trying to achieve a much more true to live gamming environment, making it more fluid and organic. The game’s environment will be more exciting and interactive; the characters will be able to explore it completely, accessing every place and doing whatever they feel like doing. If any character (or should we say any player?) feels like jumping trough a window, (s)he can do it.

The gameplay will not differ that much from traditionalTomb Raider gameplay – which is good; after all we do love TR’s gameplay – and the style will range from stealth-based to traditional Tomb Raider exploration.

Not much was revealed about the game’s plot, although Core restated that the game’s themes will be much darker that the traditional TR games, but again the company didn’t went further into details.

The basic story goes something like this: While visiting a friend in Paris, Lara is framed for a serious crime, forcing her to evade the law. Paris will then be the first of several huge playable areas featured in the game, and will have Lara breaking into, and possibly vandalizing, the famous Musée du Louvre. No more was revealed…

Although we realize this is much less than what you want to know, this is official information, all confirmed this week, not rumours, so we do expect it will be enough to keep your spirits rested until more details are revealed later this year, and also to stop all the nonsense and rumours floating around.