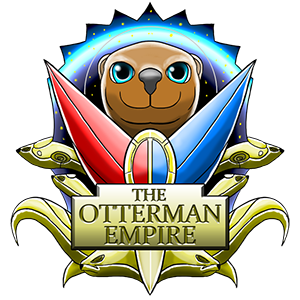 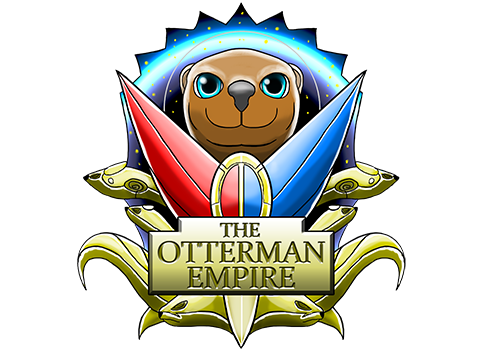 The old logo of The Otterman Empire.

Situated in Prestwich, Tri-Heart Interactive is a community driven video game developing company that alters the game’s development based on the feedback they receive from the public. Their ambition is to let their fanbase and newcomers to the video game fandom to feel like they are actually included in the aforesaid game’s development. 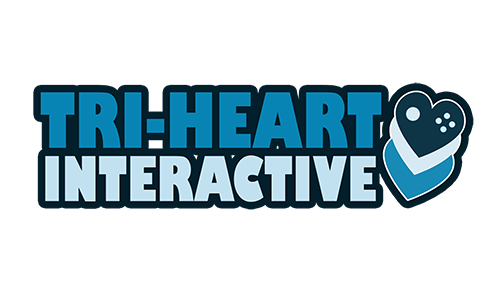 Tri-Heart Interactive claims to be a community driven company.

Throughout game development, they document via dev diaries, community events and Q&As to keep their fans and potential, upcoming players informed of their progress. Besides the abovementioned game development, they give other game developing teams, artists and players the opportunity to flaunt off their work, share their accounts and experiences through their monthly interview and features on their pages. Not to mention, providing a platform for the video game studios, artists and gamers to honour their passion.

The Otterman Empire isn’t your typical, nitty and gritty, triple A generic shooter. In fact, it’s completely the opposite. It’s a family-friendly, split screen, first-person shooter featuring humanoid, anthropomorphic space otters that shoot fish at each other and said game is set in the vast expanses of outer space. It can be comparable to the likes of Ratchet & Clank, Jak And Daxter (though, Jak 2: Renegade, Jak 3 and Daxter are up for debate in regards to whether they are unrealistic, cartoony shooters or not), Rad Rodgers, Conker’s Bad Fur Day, Conker: Live & Reloaded, Splatoon, Mario + Rabbids: Kingdom Battle and the recent Iconoclasts, to name a few, in terms of family-friendly or cartoonish shooters.

Two space otters battling it out in an outer space setting.

Players create teams of team-based characters to better suit their play style and their skills. The main objective is to fire your (fish-shaped) weapons at the opposing team. As your team and the enemy group are locked in gun combat, the health bar depletes while the fish makes contact with you and your partner. The same can be said about the members of the opposing squad. If it reaches zero, you’ll respawn at a chosen or random spot in the map but it depends on which map is picked. Whichever team collected the most points at the end of the match emerges victorious. Speaking of the teams, the characters are split into two teams, which are represented by the red and blue colours respectively. 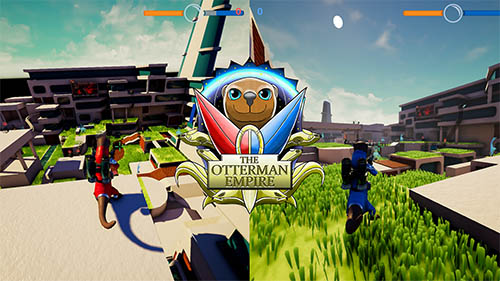 Each team needs to deplete each other’s health in order to score points.

If my memory serves me correctly, according to my experience with The Otterman Empire at Play Expo Manchester 2017 (a yearly video game convention that takes place at Event City, which is practically next door to the Trafford Centre, and run by Replay Events), I must enter bodies of water to refill my water-powered jetpack and the ammunition (the ammo are fish) of my firearms.

Judging by my gaming experience with it, the controls are clunky but that’s understandable since the game is still in development and the snippet/demo of the game I interacted with at the time doesn’t represent the final product and it’s hard to tell which character I’m playing as due to how the controller is connected to the computer. Despite I don’t give a hoot about graphics and I tend to consider graphics as not the most important thing in gaming (besides, photo realistic graphics or highly-detailed, top of the line graphics does not mean a fantastic game), the fur feels a bit off and looking at the fur in a visual perspective, they are similar to their appearance in a PlayStation 2 or a Nintendo Gamecube game. I mean this is 2018 we’re talking about here and comparing the fur of the space otter characters to the fur effects in any PlayStation 3 or PlayStation 4 game, this is embarrassing. 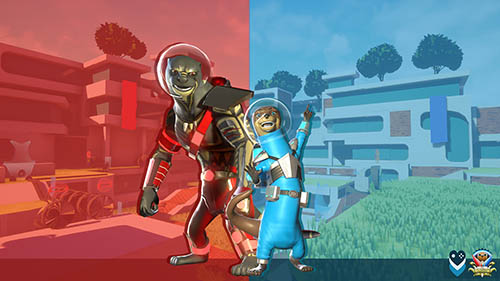 Despite this is a modern game, the fur look like PS2 or Nintendo Gamecube fur.

As game development of The Otterman Empire progresses over time, the indie company releases a snippet or a demo of the game every month for their audience to play. Once a snippet is distributed, they listen to their community in order to gather feedback on how the game should be made with them in mind and what kind of content should be included in it.

Each month, the company sends out a demo for their audience.

In spite of my nitpicking, I’m a sucker for anthropomorphic, humanoid animals, the harmless, family-friendly atmosphere of this game is what pulled me in regardless of the fact I absolutely hate shooting games (whether they’re first-person, third-person or mainstream, run of the mill, stale, triple A shooters) with every fibre of my being, the sci-fi futuristic setting interested me and I’m intrigued on what this game has to offer in the future. 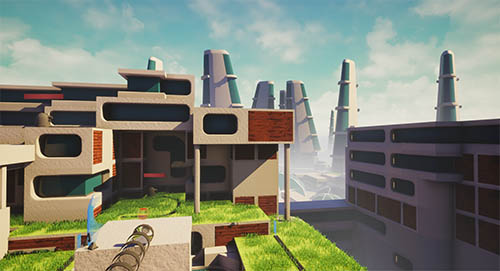 One of the space-age locales players can visit. 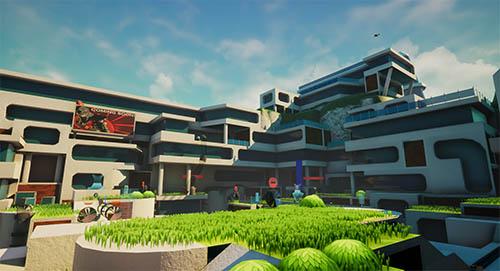 One of the countless maps gamers can duke it out in.

What is Manchester Gamers Unite, you may ask? It’s a non-profit, independent gaming and network organisation as well as a community driven group to boot run by Simran Whitham (SimranWhitham from Twitter and simran_whitham from Instagram) and Steph Staszko (SugarAndGames from Twitter and sugarandgames from Instagram) at the Dive Bar NQ within the Northern Quarter in Manchester where indie video game developers, already-established, renowned, triple A video game companies such as PlayStation and Ubisoft and gamers gather one night a month as one massive community to drink beverages, alcohol or soft drinks, enjoying refreshments, having fun, meeting, greeting and mingling with each other, try out the latest games currently in development that aren’t released yet created by other studios and show them off to the masses.

My main, major gripes with the Manchester Gamers Unite events are the aforementioned events tend to finish at the late hours of the night during the weekdays and despite Manchester Gamers Unite have a much friendlier atmosphere and community than Nintendo Manchester (formerly known as StreetPass Manchester. The less said about the insufferable toxicity of this unfriendly, unwelcoming group, the better. To be honest, they’re one of the main reasons why I’m starting to dislike Nintendo and why I reckon I’m too old for Nintendo which quite frankly, I’m NOT sorry for being open about why I don’t hold Nintendo in high regard anymore. I got to say what I got to say), people have a tendency to not allow strangers into their small circles according to one of my friends… well, if that’s a way of explaining about this. As a result of the aforesaid events ending at a later time, I can only stay at them for a few hours due to the fact the more I stay out late, the less buses there will be which in turn means returning to my home safely will prove to be difficult. Why people like to stay out for long periods of time during the night, I’ll never know. Lastly, the abovementioned events have an appalling selection of video games available to play which caused me to become bored beyond belief. It pains me to say, “Wouldn’t it kill for Manchester Gamers Unite to showcase a variety of games with various game genres?” I’m a long-time platformer connoisseur and a life-long veteran of platforming games and it would be nice if Manchester Gamers Unite and the developers could present indie platformers (and kart-racing video games), old-school platformers (or go kart-racing games), or triple A platforming (and kart-racing games) for once. In my opinion, I’d prefer Manchester Gamers Unite to host the events during the day in the weekends and end them at reasonable times like let’s say, 6 o’clock or 7 o’clock, for instance. Nevertheless, they have room for improvement.

My alternatives to community groups like this are the Animeleague community and the NW Cosplay community considering their cosplay events are held in the daytime during the weekend. If you want to stay until the end of a Manchester Gamers Unite event, by all means but don’t blame me when there will be a lack of public transport when the abovementioned event ends.

Speaking of Simran Whitham, he attended Futureworks to study a video games design course as well as hosting the Manchester Gamers Unite group alongside with his partner in crime, Steph Staszko, and being the founder and the leader of Tri-Heart Interactive. This goes to show how much he have come so far.

At the moment, this game isn’t slated for release on PlayStation 4, XBox One, Nintendo Switch, PC, Linux, Mac, Steam etc yet and the dates are yet to be confirmed. At the time of writing, it’s still in development right now.