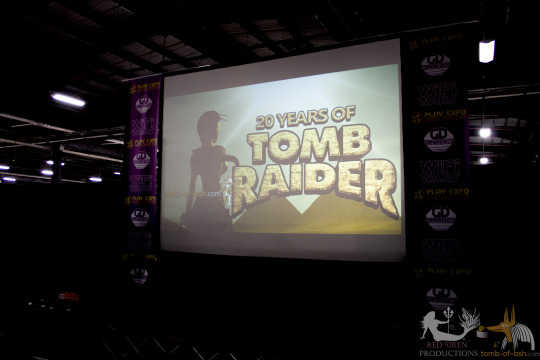 “We had no idea what we were doing, we just put pieces together and made them work”

The above quote was repeated by many members of the Core Design team throughout the years and it feels like the most appropriate way to open this post. I had never done events before, let alone co-organised one, so I found it ironic that I was writing a large dissertation on Let’s Play with chapters dedicated to prosumers and how fans produce huge amounts of cultural capital for their fandom while I was co-organising the largest gathering of original Tomb Raider developers (and maybe fans?). But let’s go to the beginning.

2015 was full of events for me; after visiting E3 and Eurogamer I decided to attend PLAY Expo in Manchester for the first time. I was not expecting much as I had hardly even heard of the event and assumed it would be something very small and local. I was, of course, pleasantly surprised. PLAY had its own charm; the variety of gaming generations mixed together made this expo so unique and enjoyable.

Over Christmas break I was working on my Baba Yaga video project and it was during this time that the idea to do a large Tomb Raider gathering began to form. Sure, the official channels do gatherings all the time, but those tend to be exclusive for cosplayers with others being invited for a dinner afterwards. No, I wanted to do something different, something that had not been done before and something that would please all aspects of the fandom.

After brainstorming for a couple of days, I realised that I had the answer right in front of me; the first posts on my website were interviews with the Core Design team so why not try and get them back together? This would certainly make it the real 20thanniversary celebration, where a team of people involved in the creation of this great series come together, meet the fans and see how their work still lives on decades later.

And so, I sent an email to Replay Events, the organisers of PLAY Expo. I was hoping for the best but days went on and the worry that this may not happen started to crawl into my mind. It was not until the 16th of February when I received an email back saying that they were planning to do something Tomb Raider related but were interested in my input as I had some contacts within Core Design. I started regularly exchanging emails with Andy Brown, the director of Replay Events, and the project started getting more and more serious.

When I approached some of the original developers from Core they all seemed interested but wanted to know more, after all, what were the chances of a fan pulling this off?  I couldn’t say more at the time since it was way too early and we were just putting the pieces together, but I managed to gather a list of potential panel guests. Some of the Core team wanted to come as visitors and the organisers assured me that passes for everyone from Core Design and their plus ones would be provided free of charge.

Now going back to my idea of involving all aspects of the fandom… When this project was still in its early stages I managed to meet Natalie Cook, the original Lara Croft model. When I told her about the Expo she said “Oh yes! I still have my costume, I could wear it!”

Natalie was invited to join the cosplay masquerade jury at PLAY Expo which would later mean that we pretty much got the whole of the community covered. What I mean is, if you look at the guest list we had for the event, you will notice that not only did we have developers who worked on every single Tomb Raider title by Core Design, but they also did various roles that would be interesting to artists, level editors, modders, writers and so on. With Natalie being part of the cosplay masquerade, we also had cosplayers covered.

The organising of the event was a secret to everyone who was not directly involved, although I was teasing people on twitter with occasional pics of my notepad, saying that something great was coming soon!

Here I think I should mention that working with Replay Events was probably the most enjoyable experience I ever had. These guys love retro games, they love Tomb Raider and they wanted to know what would make fans happy. Every time I’d give them an idea they’d immediately take it on board. Nothing was ignored. Their dedication is impressive.

Fast forwarding to August, when we finally announced the event. I remember not sleeping the night before as we were preparing a Press Release with Replay and their PR department. I was actually interviewing someone for my dissertation the same day, so it was rather chaotic and we scheduled the announcement for the morning of the next day. I couldn’t sleep. The excitement got a hold of me so I simply opened tabs with Twitter, Facebook, Tumblr, etc. and drafted posts about the event, all I needed to do was press “post” when PLAY Expo published their press release. I even attached a gif of my notorious notebook opening up and revealing the project.

The week of the event was hectic. Actually, that’s an understatement. My American friend, Tatiana, landed in Manchester on Wednesday the 5th of October and when I met her at the train station I said “Hi, I really missed you but I need your help! Let’s go!” In the next couple of days it was on us to ensure that the stage had a slideshow, holding slide, Croft Confessions, that the host knew what he was doing and that the guests had special information packs.

This involved going to sleep at like 4-5AM, waking up at 9AM, going to Event City, checking with the team, filming the premises for our upcoming recap video, constantly staying in touch with all our Tomb Raider guests and, most notably, meeting fans from all over the world. I can’t describe that warm feeling I had when I was sat in Wagamama (which became our 2nd home that week!) with Ukrainian Tomb Raider fans, checking my phone and seeing people from Germany, Spain, Czech Republic, Italy and other countries landing at Manchester airport for this event. It was incredible. It was probably the first time I realised that we were actually a community and we had managed to come together to meet our heroes.

Us with Tomb Raider fans from Ukraine.

Oh and yes. On Friday evening, when we had just left Event City and were filming the building for our recap video, a car pulled up by us and Peter Connelly asked for directions. He was giving a lift to his friend from Ubisoft who was supposed to meet the Audio team for his talk next day. Peter gave us a lift to the hotel, where we were supposed to be meeting the rest of Core Design. When we arrived, Stuart Atkinson and Nathan McCree were already there. The next few hours were simply surreal! Every hour or so everyone from Core would go “HEEEEY!!” and would go to the reception because someone else had arrived. They’d introduce us and we would carry on with our chats. Peter Connelly gave us a ride home afterwards and we started getting ready for the big day ahead.

We woke up, got ready and set off to the hotel where Core was staying. From there we took a special coach to the venue. We entered Event City way before the general public did. We spent the next few hours filming, socialising and, of course, coordinating the big thing that was supposed to happen in the afternoon.

Here I must mention a few people who significantly helped me with the whole event. It was great to have people approaching me and asking if they could assist me in any way, FANS UNITED!

Tatiana Leitzel, she was simply my saviour. At some point I realised that if I forget to do something I just needed to look at her face and be like “OH RIGHT I NEEDED TO SEND AN EMAIL TO THIS PERSON!” I particularly appreciated that her reply to all of my requests was “Already done”.

Everyone at Replay Events for actually making this happen!

The Survivor Reborn team, who helped us a lot both before and during the event. They promoted the event, something that not many Tomb Raider websites did at the time.

Matt Andrews, for being the most incredible host ever!

April and Tudor, for assisting us with videos and additional help with getting stuff done.

And a special mention for Terenete, my co-admin, who could not attend the event but spent the whole weekend glued to her laptop and taking control of Tomb of Ash’s social media channels.

Now back onto the event itself. When the time came for the panel to commence, I asked the engineer who sat next to my table to START, Shelley Blond’s (the original Lara Croft voice actress) voice said “The Tomb Raider 20th Anniversary panel will start shortly, please make your way to the main stage” and the Croft Confessions started to play. I must say that I was expecting people to be a bit emotional during the slideshow as the music and messages displayed gave me shivers when I was editing them… but, this is when a Tomb Raider fan inside of me woke up with realisation that Core will finally meet their fans, they will see how much they are appreciated, fans will meet their heroes and, of course, the impact the game had on me personally… it simply broke me down. Mind you, I am not an emotional person at all but I couldn’t hold it then. Later, after watching the videos from the panel that we captured I saw that it was not just me who felt emotional (yay?).

An hour before the panel I gave the guestbook that I designed for this event to Lori from Survivor Reborn and asked her to make sure that every fan had an opportunity to sign it. The book was also passed around during the panel and we got a lot of lovely messages addressed to Lara and Core Design.  I found it super cute that some fans decided to sign their favourite render or a render from their favourite game. I honestly did not expect that to happen!

In the evening we had a get together with Tomb Raider fans at The Font. Everyone was still super excited from the panel and we generally spent the evening having a few drinks and enjoying each other’s company. Unfortunately we had to leave early as we really had no sleep and we had another day to go through.

We had a looong 5 hour sleep on Sunday. We took an Uber taxi to Event City and we were discussing the day before and what we had in plan for today. This was when our driver, Jamal, decided to blast the Tomb Raider soundtrack! I got a call from Murti Schofield, who said that pretty much everyone from Core was still there; they were too tired to attend the community dinner and felt guilty about it so decided to stay an extra day.

And I shall end this post on this cliff-hanger. You will have a chance to learn much more from our upcoming recap video, featuring interviews with Core Design as well as lots of behind the scenes stuff!