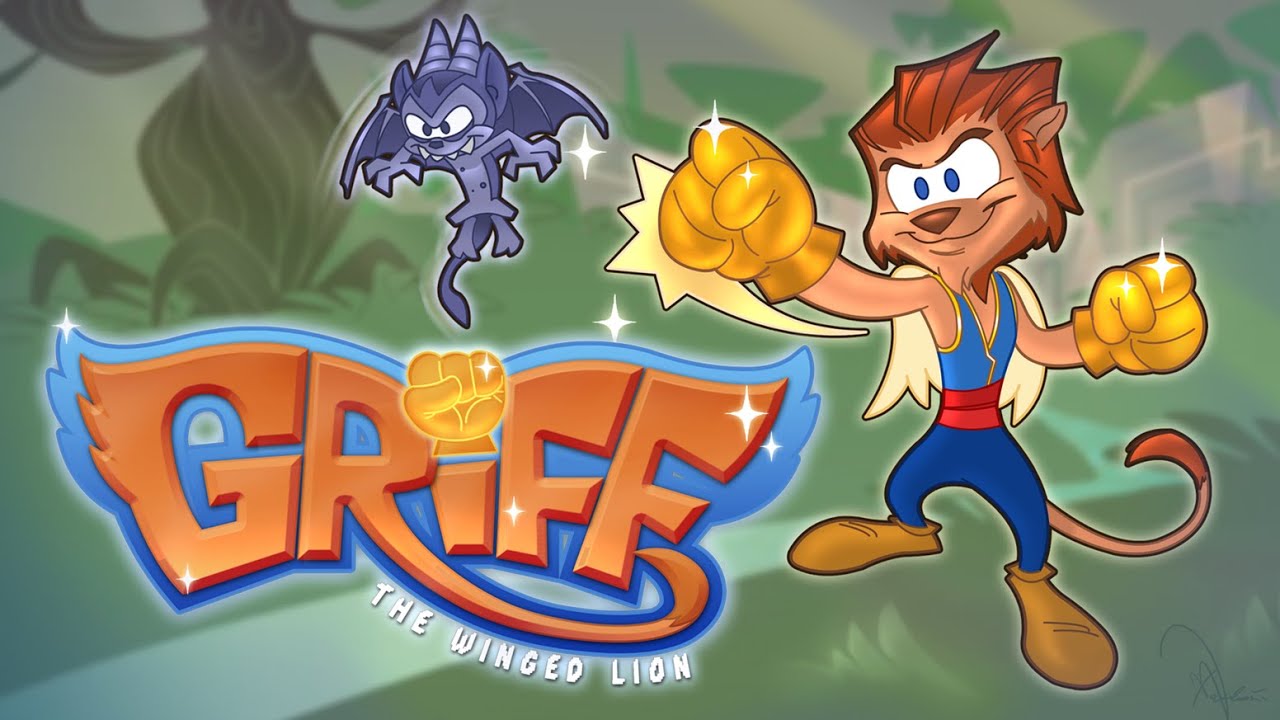 Griff The Winged Lion: Back to Basics!

Griff the Winged Lion is deemed to be the spiritual successor of Spyro and Crash Bandicoot.

Kickstarter is a hit and miss and a mixed bag, especially in recent years, which sees the birth of phenomenal successes such as Rad Rodgers, Shovel Knight, Undertale and Shantae: Half-Genie Hero (despite it’s inferior to its predecessor, Shantae and the Pirate’s Curse) and dumpster fires like Bangarang: A Short Film Before Rufio (starring Dante Basco and directed by Jonah Feingold, a butt of a shameful, unprofessional, disrespectful and downright rude director who I have the displeasure of speaking to on social media), Mighty No. 9 and Yooka-Laylee (well according to numerous naysayers and critics) deemed to fail to deliver on (and literally not deliver the backer rewards to the backers, in Bangarang’s case) the promises the developing teams set out to do in the first place. The aforementioned worst Kickstarter (possibly of all time) projects will be forever go down in history and be named, shamed and frowned upon.

Enter the beacon of hope, Griff The Winged Lion, a retro-inspired, open-world 3D platformer in the vein of Spyro The Dragon and Crash Bandicoot. It’s developed by Breakerbox Studios and published by Spiral Summit Games. If it all goes well in the future, it will show the failed trash heaps how a Kickstarter campaign is REALLY done (with finesse and pizzazz). 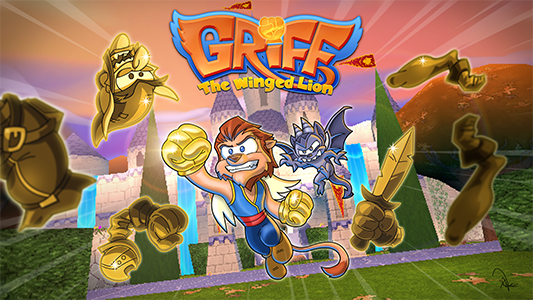 Joined by his sidekick, Gargle, Griff embarks on an adventure to uncover his destiny.

Does “Griff The Winged Lion” ring a bell to you? Of course it does! Thanks to Cliqist, I knew of the game’s existence last year. It debuted last year on Kickstarter on 8th September 2016. Unfortunately, it failed to reach its goal as 48 backers raised $1,021 of the $15,000 goal. Since then, the alternative way to support the game is through Patreon at the time. Little did I know it would return to Kickstarter in the (near) future when I least expect it for the second time to take a second crack at crowdfunding?

At the time of writing, it raised $2,935 of the $25,000 goal. Whether it will reach its Kickstarter goal or not is still up in the air but only time will tell.

If you’ve played the Spyro and Crash Bandicoot games during the 90’s, you’ll feel right at home and you’ll be no stranger to what Griff the Winged Lion lays in store for you. In fact, this game contains everything you come to expect from Spyro and Crash Bandicoot back in the good old days ranging from going through a gate that grants you the ability to fly for a short period of time to charging through your enemies with ease as if they were nothing. 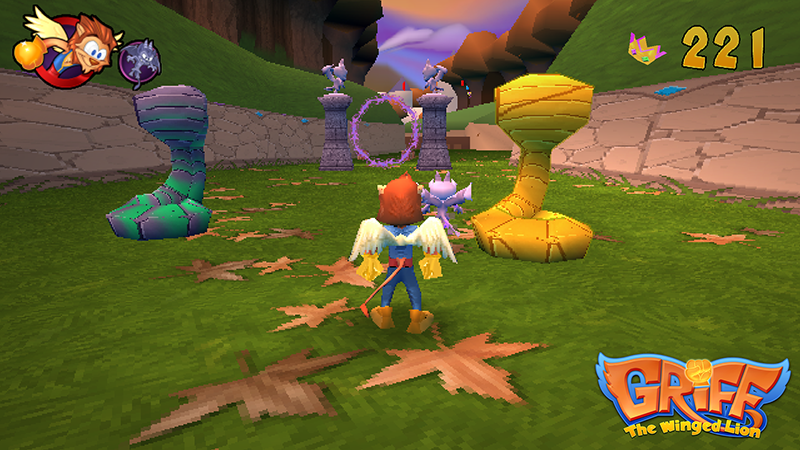 Entering this circular gate will allow Griff to fly temporarily for a short period of time.

Within the medieval magical kingdom of Autumn Terrace (clearly inspired by the Summer Forest and Autumn Plains homeworlds of Avalar from Spyro 2: Gateway To Glimmer/Spyro 2: Ripto’s Rage!), a young Griffin prince, simply named as Griff, is summoned to take part in a mythical tradition. Once every generation, an elderly mage predicts the future leaders’ destinies and present them with their roles. When it’s Griff’s turn, unfortunately his role is hidden from the mage. To rectify this, he sets out on a quest of epic proportions all in the name of self-discovery while he’s accompanied with his sidekick, Gargle the Gargoyle, and his friends (Gavin the Griffin, Terra the Unicorn and Mia the Phantom Cat) and uncover the answers of why he is denied of his role. 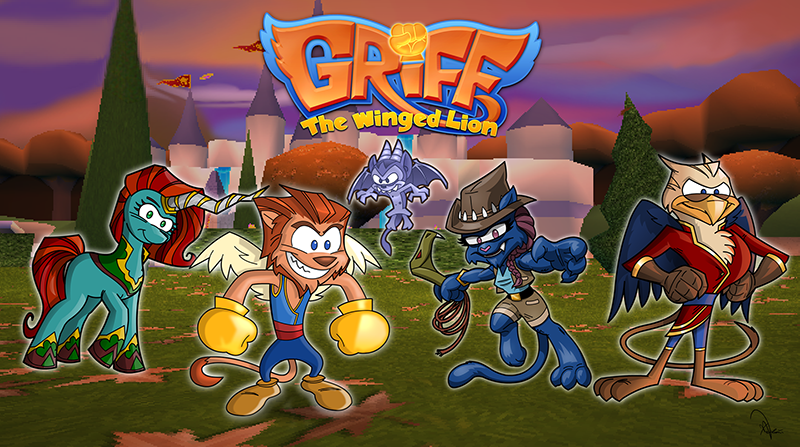 Long, long ago in the olden days, a horrible curse struck King Midas. As a result, everything he touched upon contact turns to gold much to his dismay. In desperation, he seeks help from a sorcerer to help him control the terrible spell he is under. The mage used his magic on a seemingly ordinary pair of gloves and bestowed them upon the monarch. When he puts them to good use, they were no longer a pair of old gloves but powerful, special artefacts. From that moment forward, these all-powerful gloves had the ability to control the ghastly enchantment and prevented the user from turning everything to solid gold. Best of all, he can control the curse and utilised it whenever he needs to. Objects and living beings can be transformed into gold with a single or a few punches. Once struck, they are shattered and can be collected. However, not every everything in the scenery can be converted into gold.

After the sovereign died, the golden-coloured gloves are taken to a shrine and are concealed away for centuries. Since then, the greedy individuals who are bent hunt them constantly on wealth and domination at the cost of crushing the weak creatures for their own selfish gains. 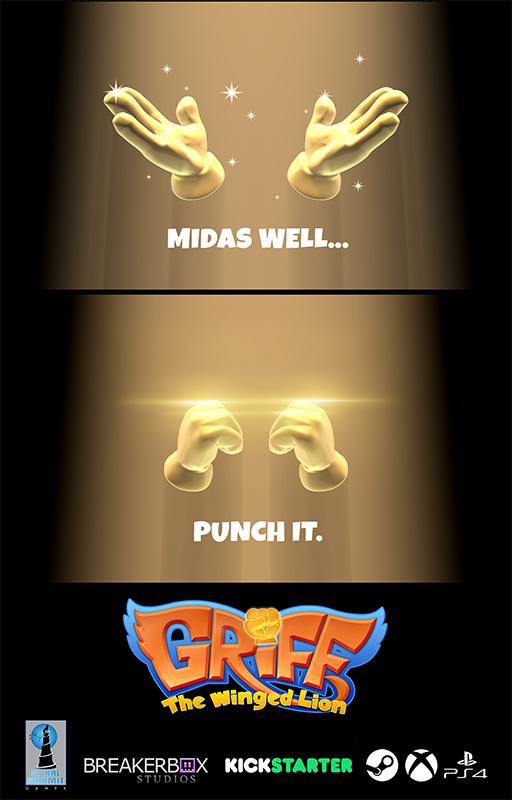 Taking advantage of Midas Gloves will change anything to rock-hard solid gold.

Breakerbox Studios promises to bring back the Spyro and Crash years of yore. 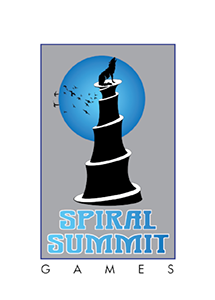 If all else fails, Spiral Summit Games will still publish Griff the Winged Lion.

Ratchet & Clank may be the unofficial spiritual successor to the Spyro series in some gamers’ eyes but Griff the Winged Lion is already shaping up to fit the bill. However, it also contains a few familiar and nostalgia-fuelling Crash Bandicoot elements and references such as Griff running from a ginormous tiki log towards the camera judging by the trailer. 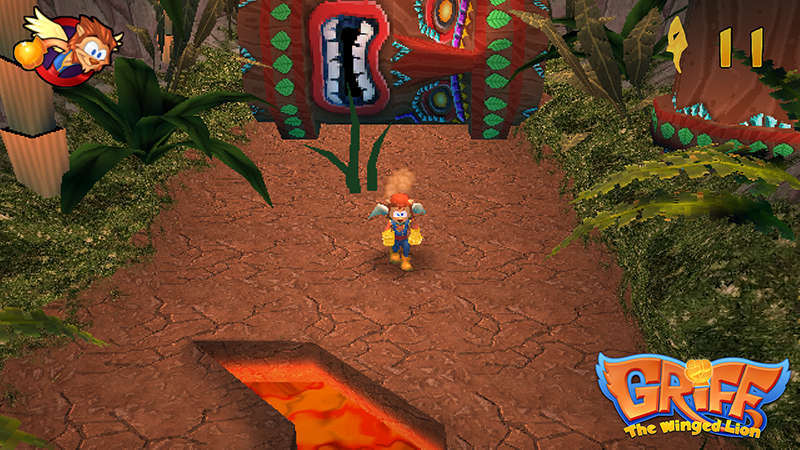 Running from a log towards the camera is reminiscent of the Crash Bandicoot games of old.

And dare I say it? It looks more promising than Yooka-Laylee and that’s saying something. And this is coming from a long-time, die-hard fanatic of platformers. In my opinion, Yooka-Laylee is inferior to past and recent platformers I’ve played throughout the years. It can’t hold a candle to its predecessors, Banjo-Kazooie and Banjo-Tooie (despite I’m not a Banjo fan but I did grew up with the former, minus its sequel), let alone Ratchet & Clank or Crash Bandicoot for that matter.

Let’s hope it will deliver on its promise (or promises in terms of the backer rewards) and hopefully, the developing team will treat their backers with the utmost respect, unlike a certain lacklustre, dull, boring, drab and dreary Kickstarter film, Bangarang: A Short Film Before Rufio.

According to the Kickstarter campaign, Griff the Winged Lion is slated for Steam, PlayStation 4 and Xbox One but their official release dates are yet to be confirmed. Regarding the Nintendo Switch, the developing team is also planning on bringing it to the console. Though, it depends on whether the stretch goals are met and how much money said campaign gathered. Regardless, Breakerbox Studios and Spiral Summit Games are doing their best to achieve this and meet everyone’s demands.

Griff the Winged Lion is coming to a preferred platform near you.

If you want Griff The Winged Lion to become a reality, you must back it on Kickstarter before it’s too late! For more information, visit its Kickstarter page and follow Breakerbox Studios and Spiral Summit Games on various social media (Discord, Facebook and Twitter) known to man! If you’re still unconvinced, the demo is already available to download from the game’s Kickstarter page so you know how the game and controls feels.

Archive of Our Own Profile: http://www.archiveofourown.org/users/Flowerstar/pseuds/Flowerstar