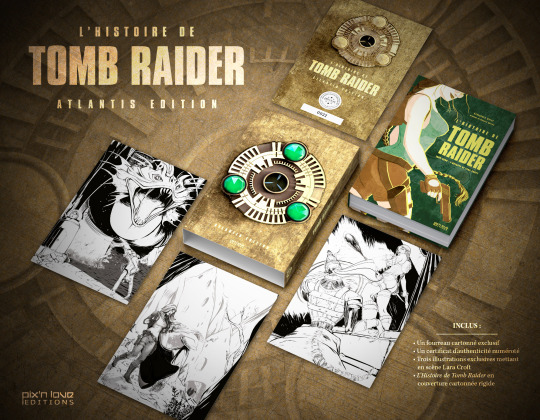 [Interview] Alexandre Serel. The author of The History of Tomb Raider

Today we chat with Alexandre Serel, the author of L’Histoire de
Tomb Raider (The History of Tomb Raider).

Hi Alexandre, Thank you so much for agreeing to spare some time and speak to us today

No problem Ash, I hope everything’s ok in Manchester!

Tell us how you’ve got an idea to write this stunningly looking book.

When I was a child, I wanted to be a game designer at CORE
Design so, I think as an adult it was obvious to write a book about Tomb
Raider! More seriously, I had the idea in 2012 when visiting a french event
about the Japanese culture, Japan Expo. My publisher, Pix N Love, was there to
present books about video games. As simple as that, I told myself “There’s
something to do with Tomb Raider”. I started doing research and, in 2014, I
started writing a few things which would become this book.

I know you were writing another book, Lara from L to A, how different is it to “the history of Tomb Raider”?

What readers should expect from this book

It’s a kind of story telling. I didn’t want to write
“Nathan McCree, interview page 56”. It was rather talking to CORE developers
so they could tell me their work, anecdotes and who they really are. Once I got
these information, I had to assemble them in order to tell a story.

The original script for Tomb Raider 1, provided by Core Design.

How long it took you to write this book?

It took me one year to “understand” the history of CORE and
another one to “assemble” the whole thing. After one year, a big draft was in
my computer. But, to be clear, I was unsatisfied with the results. So, I
rewrote whole passages. Then, one day, I received lots of documents from
Richard Morton. So, hundreds of documents had to be translated, a huge work
from Anaïs Orhant. It took a few months. While waiting for the translations, I
was finishing passages.

I’m sure you’re extremely proud of it. What was the most challenging in writing
“The History of Tomb Raider”?

No, I’m not really proud. Some people were able to read the
book, saying it was really good. But I’m an Eternal dissatisfied person and I
only find defects. The hardest thing ? Angel of Darkness without hesitation.
The game development was so chaotic that I spent weeks trying to put the right
things back in place. I had to manage lots of information. Pieces of stories
that were scrapped, things that were written by Murti Schofield or other people
form CORE Design… that was tiring. There were also incoherent game design
documents… I remember spending entire days telling myself « It will be hard to
put things back in order » The most important thing is to think of the reader.
So, trying to tell him / her a coherent story and to make him / her understand
that things were complicated with this game. I unfortunately believe that
there’s not « one reality » about Angel of Darkness but several. Each person
has a different version of the story and this is quite normal. Richard will
remember this point, Murti another one and another person has yet another
version… So many years later, I’m still very sad that this caused the fall of
CORE Design. Every employee of the studio is an immense artist. I would love to
see them working together again. Wouldn’t it be great ?

I know that there are plans on English version, could you comment on that? Any
other languages you might plan to translate it to?

We are in talks for the English version, but nothing is yet
decided. The other countries might have a « different » version because it
would not be fun just translate the book. Moreover, some passages talks about
the Tomb Raider phenomenon in France, so this not interesting for English
readers. It needs a few challenges. I would like to add a few things to the
English version, like a meeting with Meagan Marie, English Lara Croft voices,
etc… But nothing is set in stone.

The History of Tomb Raider has one of the best (if not the best) covers I have ever
seen. Who designed it?

Three of us have worked on the cover. With Célia Beauduc,
who is also the illustrator, we’ve got the idea of a cover that “calls for
adventure”. The first draft was showing Lara from back, looking at the horizon.
But I wasn’t convinced and found it a little too “classic”. So Célia, who is
very talented, started thinking about a concept, the idea of Lara turning to
the reader, inviting him / her to read the book and going on an adventure. Then
Luc Pétronille, who is the creative director of Pix N Love took Célia’s
illustration and reworked it into a final version. He then created the Atlantis
Edition all by himself. He is also really talented and he impresses me every
time.

One of the early cover designs

On behalf of an entire Tomb Raider community and Core Design fans, thank you for
your effort.

Thank YOU! Don’t change and please continue to make CORE Design life in your mind.