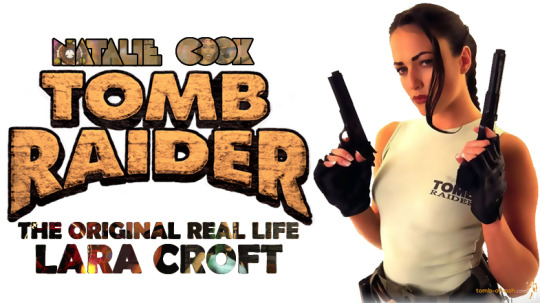 In 1996, Natalie Cook was the first official model to represent Lara Croft. Today she sat down with me and a couple of folks from Survivor Reborn to talk about her experience as the original, real-life Tomb Raider!

Thank you for joining us today! Dare I say you look absolutely fantastic and it’s hard to imagine it’s been twenty years since you were Lara’s model!

Thank you, nor can I [she laughs]!

Well, Eidos at the time were looking for a model to be Lara Croft and my agent gave me a call. She said to me “You know your brown contact lenses that you’ve got from your previous job as Snow-white for Disney? Can you put them in and go for the casting and see how it goes? They [Eidos] stipulated that they wanted a model with brown eyes, athletic-looking and with a nice-sized bust.” There were lots of girls and I thought that I wasn’t going to get this job… and yes so I just went for this interview. They asked me a few questions. It was twenty years ago and I can’t quite remember what they were asking… and yeah, my agent gave me a call and said that they [Eidos] wanted to use me as Lara Croft.

How much did you know about the character when you first dressed as Lara?

Well, not very much… they didn’t really say too much about her. I think because she was quite new at the time, and the character was in the early days of development. I think as the years have gone on they’ve adapted her so much and they changed the way she looked, like ridiculously, she’s completely unrecognisable from that picture there [she points on my t-shirt with classic Lara] to what she looks like now!

Do you remember any other girls who were at ECTS?

I do, at the computer show [ECTS] there was this girl called Katie Price who’s gone on to be really famous and another girl whose name I can’t remember but I do remember that me and Katie didn’t quite gel with her. Me and Katie were really enjoying what we were doing and the other girl didn’t seem like she was enjoying herself.

Natalie Cook on the left, Katie Price on the right. ECTS, (1996). Olympia, London

So I’d imagine you were the lead model. How were your relations with the other two at that expo? Were you three having fun portraying Lara?

Yeah, we were told to just run around, pretend to sort of shoot people, and basically “kick arse” – that’s what they told us to do, so we had great fun doing that [she laughs]

How did you feel at ECTS? Did anything unusual happen?

I can’t remember anything unusual but I do remember that we had such a great time portraying a woman that, you know, men were fearful of. She was used to getting it her own way and basically we used that to our advantage. And the guns that we had were quite realistic and we just had a great time.

There’s one mysterious detail we noticed on one of your early photos. What is this notepad you have? Also there’s a signature on your shirt. Do you remember anything about it?

Hmm, no I don’t remember what that is [she looks closely at the picture]. Oh it might have been the game!

As for the signature, that was Björn Borg, the tennis player. At the time, these were white tops and they didn’t have “Tomb Raider” written on them there. And obviously when they chose me to be Lara’s model to go to the places all over England, they changed my outfit to be more thematic.

Important question. Have you played the game?

Did you try to play any other Tomb Raider games? Do you follow the series at all? Do you like the new version of Lara?

I don’t [follow the franchise], no. I should really. I can obviously tell when I go to the shops and see the demos and posters and I can tell that the graphics have changed enormously since the time I was Lara.

Other Lara models after you had some strict terms and conditions such as “no talking in the costume”. Were you under any such conditions?

No, they never told me that I wasn’t allowed to talk in the costume. I was walking around talking to people because people wanted to speak to me about the game or about Lara.

In this picture you’re with some people from Core Design including Toby Gard and the legendary Ian Livingstone. Did you speak to any of them? Were they giving you advice and directions on how to portray Lara?

No, they just said that she was sort of a “bad-ass”, “kick-ass” woman that is not to be messed with and she knows what she wants in her life and she’ll go out and get it.

I know that Toby shouted “I created you!” at Katie and she just walked off swiftly.

[She laughs] I wonder what she said back

Oh no, she just walked away

Oh did she? [She laughs]

Tell us about the video advert that featured you dressed as Lara? How long did it take to film?

It was a night shoot at some sort of disused warehouse/factory and it was a 12-hour shoot. I remember I got there at 6 in the evening and left at 6 in the morning. It was all outside and it was quite a cold day as well so I was very, very cold. Unfortunately, it is not me doing the back-flips. My children think it was me. They’re like, “mum, I didn’t know you could do that! Show me!” and I’m like, “yeah, not now, I hurt my leg” [she laughs].

They had a firearms expert there as well to teach me how to fire real guns, which was fantastic! There were just lots of explosions…

Were they real guns?

Did you expect the game to become so popular and Lara to turn into an iconic character?

No, not when I was here doing the shows, no. ECTS was the very first show that we did. I never ever thought that it would [become so popular]. It was when they chose me to be the official Lara Croft model and I went to do the launches for the game in different places I realised how big she was. All these fans were so interested in the game and the game was being labelled as one of the most amazing computer games of that generation. And obviously having a woman as a protagonist was incredible and new.

Ever went as Lara to a fancy dress party?

I don’t really go to that many fancy dress parties, but it could be an option! I never really thought of it actually! It is funny because we do have a fancy dress costume shop down the road from us and a Lara Croft outfit is in there and it is quite a nice one!

I know you’ve seen the Tomb Raider films, what are your thoughts on them?

I thought it was very good, I think they cast it very well. Angelina Jolie played an amazing part. It probably would have been better if they had a British actress, considering that she [Lara] is British… but she [Angelina] did fit the bill.

You know they’re making a third film right? You should definitely go for it!

Are they? Oh I did, back then when they were making the first film someone from Eidos called me and said that there might be an opportunity for me to have a small part in the film, but it never really happened…never mind

What are you up to these days?

Well, since being Lara Croft I did a couple of high-profile things after that. And then I had four children since then and I’m now a full-time mum and I love it!

I know that you write songs and play music…

Yeah, not really much going on there. I was supposed to bring out a record as Lara Croft and it was called “Raiders”. I recorded it in the studio and then the song was dropped…

Did you know Rhona Mitra, who was the model right after you, recorded an album as Lara?

Oh yes I’m aware of it, haven’t heard it though

It’s rather awful to be fair, perhaps you should consider correcting this?

Yeah! It is an option! Yeah! I’ll think of that!

Thank you so much for coming here today!