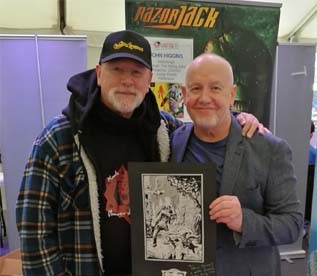 I was at Chester ComiCon on Sunday. I’d seen that John Higgins of world wide Watchmen fame was booked as a high profile guest, so I took along my copy of the one, original, ground breaking and only true graphic novel (in my opinion) to get it signed. I already had Dave Gibbons’ signature on the inside page and have long given up trying to get Alan Moore’s.

Another item I took was a single page from my unpublished 1970s comic City Tales. John had inked my pencils for a single page spread, back around 1976. I opened with, “Hi, you probably don’t remember me but you inked this page for me decades ago and I was wondering if you could possibly sign it with a message.”

I was astonished at his response, which was, “Well hell yes, Tony (my working moniker then). How are you! It’s been decades. I heard you’d gone off to be a monk or a Buddhist or something. We were all amazed at that. How come you could give up comics with the wonderful talent you had?”

What had actually happened was that I went to live in an ashram back in 1980, travelled to India and did the Sufi trail through Turkey and other things. I did not become a monk but took Sannyas, but the explanation was all a bit long winded so I just said, “Yeah, something like that John.” As far as my commix buddies were concerned I’d just gone off the radar, ‘vanished’ off the commix map for 5+ years.

John’s delight at us meeting again took me totally by surprise.  I was thrilled, that goes without saying, but his response blew me away. He signed my copy of Watchmen, the City Tales and an A-Z of Alternative Comix with glowing dedications…”my good old friend from way back…” and so on. It really was like a scene from a film. I was sure he hadn’t given me a second thought in the intervening years, and yet as we chatted it was clear that he remembered us as two main contributors to the UK Underground commix scene of the 70s.  Clearly I have to re-evaluate my perspective somewhat on my early years.

We chatted about the many ‘alternative’ artists we had known, including Dave Gibbons, naturally. I haven’t spoken to Dave for several years now but it’s clear that despite everything Dave and John have accomplished in the years since 1986/87 the goliath presence of the Watchmen comic looms over both their lives…as it still does for all us aficionados taken by storm when it broke onto the comics scene and changed EVERYTHING. And I mean everything.

We swapped a whole spiral of reminiscences about those heady days, our formative years which for both of us, and everyone else involved, had been so exciting. There was a passion for creating alternative commix and finding ourselves part of a vibrant alternative community. Fanzines proliferated. Everyone was trekking down to London with massive portfolios under their arms. Comic Conventions really were all about COMICS. I don’t think it’s an exaggeration to say that it was a historic and highly influential period and clearly it still means a great deal to both of us. What was especially terrific on Sunday was having the chance to relive it and share it all over again with someone who was actually there. Also, we weren’t just two old timers commiserating on days past or opportunities missed; we’ve both been successful in different ways, John far more so than myself of course; and we both still feel undying enthusiasm for the creative experience of drawing and commix art in particular.

After the ComicCon ended we found ourselves back to the Queen’s Hotel in the centre of Chester and passed a couple of hours in the hotel bar enthusing, laughing and catching up on the intervening years. It was truly exhilarating meeting with John again after all this time. His memories of our shared experiences opened up many forgotten areas of my early artistic life: swapping comics & fanzines through the mail, meetings in hotel lobbies to discuss spot illustration & page layouts, the smell of ink from newly printed fan mags, those huge cumbersome portfolios, breaking taboos and ground rules, imported American imprints, the buzz of walking into a hall filled with tables stacked with thousands of comics.

Also I was unprepared for his generous enthusiasm about my own work. His recall of my part in the ‘underground scene’ has possibly grown in his mind…or diminished in mine, I’m not sure! Anyway, it was a blast and made me feel motivated in a way I haven’t felt for years. What an intoxicating time the 70s alternative comics had been, so full of promise and excitement.

In the next few months I must go and see John’s exhibition at the VG&M in Liverpool. It’s a retrospective of his entire his life’s work, so far, celebrating his achievements as a son of the City.  It has proved so popular that it is being extended into next year, but I’m not going to wait that long!

Other parts of the ComicCon in brief: I talked to a fair number of TR fans and even some AOD fans and all were v enjoyable exchanges. I even sold a few A4 signed posters of Lara, Kurtis and Lara & Kurtis. Most of the fans said they preferred the ‘old’ or classic TR, even those who played the new gen Lara. The general consensus seemed to be that the old style puzzling and game set up were more engaging. And I found a lot of agreement for the point that there is no real reason why there shouldn’t be a healthy parallel series of games with new gen AND classic styles and sensibilities. There are so many versions of Lara now, just like the parallel Batman universes, and they could all cater to the varied interests and passionate dedication of her many worldwide fans.

A special mention for a special fan who showed up at my table early on – Jamie Spilsbury. He is a highly knowledgeable and enthusiastic guy and we chatted at length about TR history that I personally knew little about.  I’m always happy to learn. Later in the afternoon Jamie turned up with a copy of Fighting Force II, which he had just bought for £4 at a nearby table. I did dialogue for that game and in fact it was my foot in the door of Core which eventually led to my getting the gig for TR VI. Jamie wanted me to sign it. I told him I’ve never signed one of these before and it made his day that he now has something totally unique. These are the types of fans that make working in comics, games or media worthwhile. 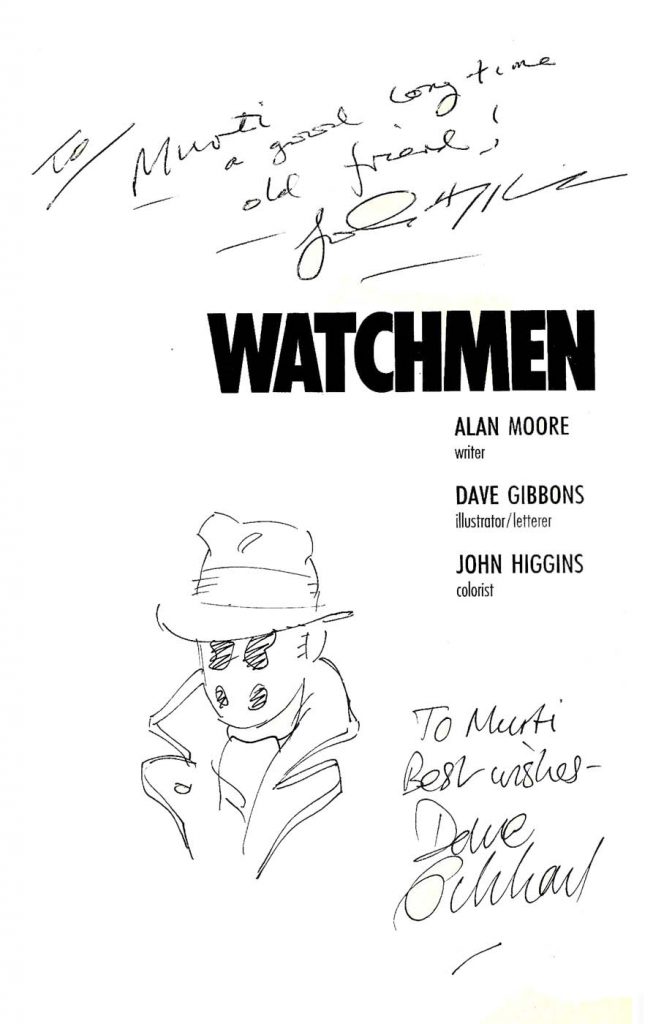