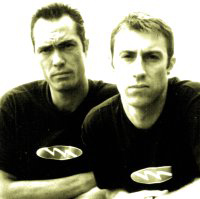 The Croft Times was the very first fan-made website. It was established in 1997 and we are happy to preserve and spread some of its invaluable materials. Luis Cunha, the creator of The Croft Times kindly gave us a permission to publish every material from his old website.

This article is rather related to the currently trending topic of the upcoming Tomb Raider Suite by Nathan McCree.

Meode Productions Ltd is a music and sound production company, established in 1997 by Nathan McCree and Matt Kemp both of whom have a long history of major successes in their respective fields.

Nathan McCree has been heralded as the best musician in the computer games industry for the last 5 years. Best known for his music in Tomb Raider I, II and III his talents have enabled him to cross-over into both the music and film industries.

Matt Kemp is a highly respected recording and mixing studio engineer in the music industry. In the past 8 years he has had numerous hit records as an engineer and co-producer in Great Britain, U.S.A and Europe.

Both have received expert training and have many years experience in professional environments on the most up-to-date equipment.

Combined, their skills amount to a formidable partnership, evidence of which can be found in their production of the music and sound for Tomb Raider III – voted “best-sounding computer game to date”.

Meode Productions is poised to win the contract to write the score for the forthcoming Tomb Raider movie. For this effect Nathan flew to LA for discussions with Paramount executives.

“I think Paramount recognises that the quality of the music was one of the things that helped establish the huge following for Tomb Raider. The studio wants to make sure that fans of the game who go and see the movie enjoy the same sort of experience,” Nathan says.

We couldn’t think of a better man for this job. We, and many TR fans, sure hope you get the contract Nathan!