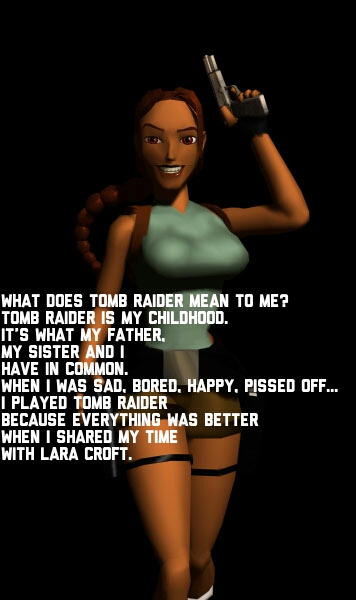 “I was 6 when my father bought my first Tomb Raider (yes, @positivelyamazonian is my sister and it was TR2). My father had just bought a PC and we went to a shopping center. He saw TR2 and he said: Wow! she has big tits… Should we buy this one? (yeah, I know -_-) My father and my sister were playing while I was looking at them. They were really bad. After them, I played TR2 myself. I was so scared of sharks (I still hate the underwater levels). After this we bought TR1. We became the biggest fans.

– What does Tomb Raider mean to me?
Tomb Raider is my childhood. It’s what my father, my sister and I have in common. When I was sad, bored, happy, pissed off… I played Tomb Raider because everything was better when I shared my time with Lara Croft.
– What does Lara Croft mean to me?
Lara Croft is my hero. I wanted to be like her: strong, brave, badass, clever, sexy… I still want.
Besides, when TRAOD was released and I played it, I fell in love with this new Lara. She was the same but stronger, sexier, more badass… and she had a dark side we’d never seen before. She is my favourite.
I feel something different when I play TR Classics that I don’t feel with other videogames and other characters. You are not helping Lara to achieve a goal. You are with her, you are her. And this is the best feeling in the world.”