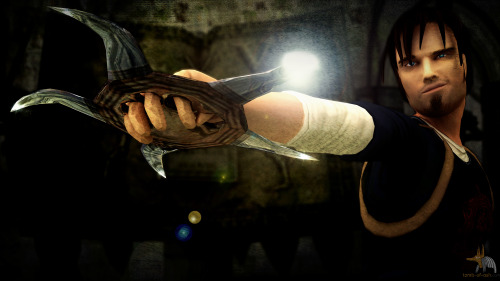 We continue to publish exclusive Angel of Darkness documents from Murti Schofield, the writer of the game. This one reveals more details about Kurtis Trent. It is an updated version of some of the already known moments.

1954 – Kurtis’ grandfather Gerhardt Heissturm is hunted down and killed by

1966 – Konstantin, age 33, meets an American Navajo Indian specialist on Shamanism and the Way of the Warrior on a lecture tour of Europe, Marie Cornel.She gets caught in the crossfire of a Cabal assault against Konstantin but proves to have unexpected innate powers that enable the attack to be defeated. ‘Things’ happen between Konstantin and Marie Cornel (go on, guess – this is the 60’s). She returns to the States.

NB. Marie Cornel’s father was one of the U.S. Marines officers who worked with the Navajo Code Talkers during WW II, which explains her area of specialist interest and her tribal links to the Chumash and Tongva peoples of pre-European California. These tribes had an ancient understanding of the Watchers Of The Land.

1969 – On a Lux Veritatis mission against the Cabal’s forces Konstantin arrives in the US. He looks up Marie Cornel. Whilst visiting the Anasazi ruins of Chaco Canyon in New Mexico they get attacked and have to wipe out a contingent of Cabal agents. Shortly after that Konstantin and Marie get secretly married in a desert tribal ceremony. For the next few years they move back and forth between the States and Europe.

Konstantin takes Marie to a secure Lux Veritatis bolthole beneath the Utah Salt Flats and Kurtis is born. As soon as they can travel Kurtis and his mother go into hiding whilst Konstantin makes return trips to Europe to help in the ‘Shadow War’.

1975 – The whole family return to Europe. Kurtis is 3 years old. They move around a variety of Lux Veritatis safe houses in ancient stronghold sites throughout Europe and the Middle East. There are many close calls with forces of the Cabal and Kurtis begins to learn about life lived on the run from a dreadful pursuing darkness.

1976 – Kurtis and his mother spend a year in Scotland in hiding whilst Konstantin fends off a particularly vicious campaign to wipe out the last elders of the Lux Veritatis. The battle centres on the underground cities of Anatolia in central Turkeywhere Eckhardt appears to be holed up. But it is an elaborate trap. Only six LV Adepts survive apart from Konstantin.

1988 – Kurtis age16 undergoes the most intense stages of his Lux Veritatis initiationunder the remaining six Adepts. His father is absent for several years on covert missions for the Lux Veritatis.

1991 – At age 19 Kurtis rebels and runs away to join the Foreign Legion. He wants no part of the ‘Shadow War’ which has devastated so many lives and left only three of the Adepts besides his father alive – if his father is still alive.

He changes his family name and tries to stay hidden within the Legion for five years, just long enough to qualify for French citizenship. He is repeatedly assaulted by bizarre occult eruptions from the shadow worlds. Weirdness dogs him wherever he goes. He can’t shake the grim legacy of his family’s brutal history. He gets nicknamed ‘Demon Hunter’ within the Legion.

1996 – Kurtis leaves the Legion after too many inexplicable events that can never appear on official Legion records and usually involve grisly casualties. He begins freelancing with a variety of mercenary and semi-legal agencies. Word reaches him that his father is still alive but he is unable to reconcile the differences between them. He never sees his father alive again.

2001 – Konstantin is finally cornered and murdered by the Black Alchemist Pieter Van Eckhardt and members of his Cabal. Kurtis’ mother Marie is in the States at the time. Only through being betrayed and tricked into thinking that Marie was in danger was Konstantin separated from two talismans, the Periapt Shards that were his only real defence. Kurtis finally gets his wake up call on receiving these two talismanic items from his mother and he goes after Eckhardt on a vengeance mission.

Kurtis also inherits a Lux Veritatis Blade the Chirugai. This terrifying discus like weapon was forged generations ago from meteorite alloy and like most Lux Veritatis secrets can only be properly used and controlled by someone trained to it. Kurtis is now the only living LV initiate…as far as is known…

Morgau Vasiley is the daughter of Mathias Vasiley of Prague, but she doesn’t materialise until game II. She too has undergone LV initiate training and will emerge as a wild card protagonist in future games – possibly the spin off Kurtis game…to be decided.

2002 – Kurtis crosses paths with Lara Croft in Paris and they team up in Prague to combat the Cabal and Eckhardt.

Events of the Dark Renaissance unfold in the first game [actually the Angel Of Darkness].