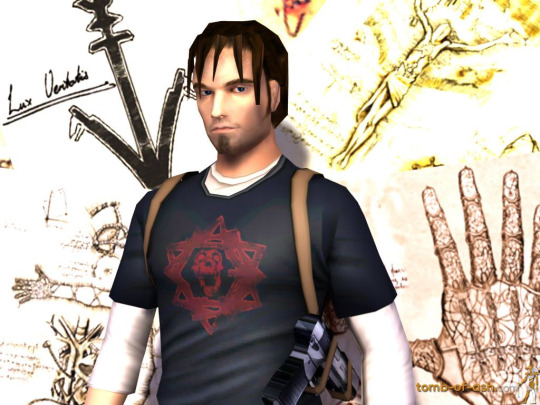 We continue to publish exclusive Angel of Darkness documents from Murti Schofield, the writer of the game. This one reveals more details about Kurtis Trent

Kurtis Trent, an unnoficial render by Tomb of Ash

Although his father’s death definitely was the trigger for Kurtis to re-involve himself in the Order and particularly the activities of the Black Alchemist, he had never become blasé about the Cabal. Or what they were. Yes he had turned his back on the Shadow War and had set out to create some kind of life for himself separate from the suffocating demands of the Order. The Legion was the perfect place to hide for a while – until things in the bizarre zone began to hot up. Somehow he could never completely shake free of the Shadow world and it erupted into his life time and time again in many grisly forms. Even the Legion lost its attractions as a place to hide out.

After the Legion he sought to submerge himself in high paid freelancing gigs, hi-risk sports, anything that provided that special ‘burn’ that meant he was intensely alive and arbiter of his own destiny.

However, being far from stupid he also knew that because you turn your back on a slavering wolf doesn’t mean it has turned its back on you. It definitely won’t slink away. Of course the Cabal was going to come looking for him at some point! He represented a loose end. He was on their inventory of targets. It was only a matter of time before he graduated as a priority and made the hit list.

And Eckhardt was still hell bent on locating all the LV weaponry and artefacts that could potentially do immense damage to himself and his Great Work. They had to be destroyed or if that proved to be impossible then buried deep and far from the light of day.

From information garnered from widespread sources [LV activity in the seas off Gotland involving Marie Cornel and a hitherto unknown Amerindian ally with an impressive skills profile] it seemed likely that the Lux Veritatis whelp had somehow got his hands on one of the much vaunted ferilium Chirugais. It was time to target the inexperienced young man and neutralise him or somehow coerce him into the Cabal ranks. He might make a good subject for Nephuman experimentation. Either outcome would serve.

In terms of its intelligence regarding the Heissturm youth it has to be said that Cabal information was not always a hundred percent accurate.

Whilst in Munich Kurtis has allowed himself to be recruited into a security bureau which is a front for The Agency’s medium level surveillance work. Task briefings are on a need to know basis and Kurtis bides his time. After handling himself effectively he is offered increasingly covert action and begins putting together data on a series of killings attributed to something or someone called the Monstrum, almost certainly Eckhardt!

He ends up in Paris as part of a security operation overseeing a safehouse, possibly a base for the Monstrum who is taking out Parisian low-lifes gang warfare style. Kurtis is tasked with providing cover for various nefarious activities and whilst continuing his own investigation he hears about an Agency operation to retrieve a specific item from the Louvre. An item of great value to Eckhardt, almost certainly one of Five Paintings Eckhardt has been searching for with every violent resource at his disposal.

Kurtis knows he is onto something.

Little did Eckhardt know just how close the last (sic) of the authentic LV initiates was.

One of the many tenets drummed into Kurtis was that you if you had any friends you should keep them close. And keep your enemies closer. Certainly close enough to know their secrets and what they were up to.

Turning your back on evil didn’t mean that you could ignore its existence. And sometimes you had to tackle it full on.

This was definitely one of those times.