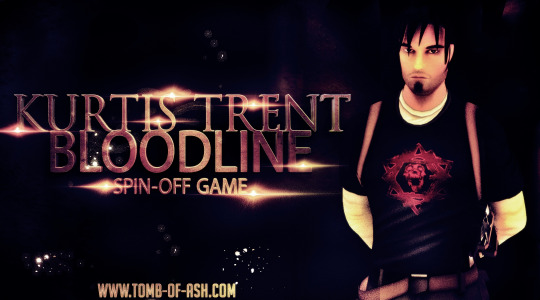 A dark night in the city.

Trash blows across the parking lot, the ground wet and flickering under the harsh lights of the emergency vehicles parked behind a cordon of police cruisers.

A sign flaps in the wind – “City Asylum – Main Entrance”

Kurtis stands amongst the debris. The place is a mess.

“Looks like someone started a war in here.” Walking further into the dark corridors confirms Kurtis’ assessment. Something bad has gone down tonight and mixed up in it is the Professor.

Kurtis heads for the Professor’s office. The door is open, glass crunches under his feet as he enters. No one at home – but a sound from the bathroom attracts his attention.

The Professor is alive, sitting on the floor and nursing a damaged arm.

“I got your message – looks like I’m too late.” says Kurtis.

“No. It’s my fault – I thought I could contain it. But it’s growing all the time and …” The Professor looks at Kurtis with haunted eyes. “We have to find it – if it escapes into the city …”

Kurtis draws his weapon – the Demon Hunter is on the case.

Using his paranormal powers Kurtis tracks down and confronts the cause of so much devastation –  a demonically possessed boy called Lucifer.

This child has powers the like of which Kurtis has never imagined existed and he is powerless to stop Lucifer from escaping into the city.

A manhunt begins, with Lucifer concealing himself by changing his appearance – infesting host after host until he possesses the bodies of influential personalities who control the city’s underworld and military alliances.

Suddenly Lucifer’s goal is revealed – to tip the world into a nuclear fueled Armageddon!

The battle rages across the city until Kurtis is sent spinning into a coma where he revisits key moments of his life.

This experience unlocks the powerful paranormal abilities that Kurtis will need to defeat the increasingly powerful Lucifer.

And all the while the countdown to Armageddon is ticking …

Main aims in the game

Aim 2 – To master Kurtis’ paranormal powers. (You need these for weapons and puzzle solving).

Focal points of the game

The core of the game is based around search and destroy missions.

Focus on (in order of importance)

Kurtis Trent has the following abilities.

Enemies will have the following abilities.

Search for pick ups to replenish energy and weapons.

Search for enemies to destroy.

Kurtis must destroy all enemies in a room before the door unlocks and lets him continue.

These are small self contained missions away from the main game thread.

They will give the player the opportunity to find and use new powers.

There is no introduction sequence.

The story is presented using the in game polygon graphics.

The story is revealed in the eight levels that make up the game.

These triggers control the resulting animations.

A line of sight cone emits from the characters head. If Kurtis is within this cone the enemy character will react according to its trigger values.

The direction and any incidental animations of the character are set on the node.

NOTE: This is Kurtis’ first paranormal power – the ability to ‘see’ the world and the danger spots around him.

It is a mind-trick to him and is not a piece of hardware.

The scanner shows the game world as a three dimensional map.

The scanner always orientates itself to the North.

It appears as a semi-transparent HUD map over the game world which allows the player to keep on steering Kurtis through the environment.

To use the map scanner:

Press the CROSS – (action) button to make it disappear.

Hold this in front of a demon to weaken it.

What’s it used for: Strategy and pick ups.

What’s it used for: Puzzles and pick ups.

This allows Kurtis to see inside locks, boxes and even humans.

What’s it used for: Obtaining codes and refueling mortal energy.

Kurtis can steal a humans thoughts and mental energy.

The human will be stunned. This has an effect on Kurtis’ dark/light meter, making him darker.

What’s it used for: Puzzles and stealth.

Kurtis can take another humans shape and knowledge.

The stolen shape will allow Kurtis to access rooms stealthily and the stolen knowledge will let him operate locked doors and complex machinery.

When the paranormal energy has run out Kurtis will return to his own shape.

What’s it used for: Puzzles, stealth and defense.

Slide a raised ladder down to ground level.

Distract guards by moving a tin can or crate.

Drop an object onto a guard.

Trigger traps by moving a crate ahead of Kurtis.

Knock down enemies with an invisible force.

Paranormal energy consumed rating : Medium to high, (depending on size.)

What’s it used for: Combat, puzzles and avoiding traps.

Hover over traps and pits.

What’s it used for: Defense and paranormal attack.

Gives Kurtis the strength to withstand physical and paranormal attacks.

Also powers the paranormal versions of his standard guns, sword and grenades.

What’s it used for: Defense.

Kurtis can stand next to a friend and it will expand to cover both of them. Limited power – bubble dome will shatter when power exhausted.

Glowing icon indicates when enemies are in the vicinity.

What’s it used for: Reconnaissance.

The eye can only be used for a limited time and will snap back to the third person viewpoint when finished.

To select an item from the D PAD paranormal menus do the following: