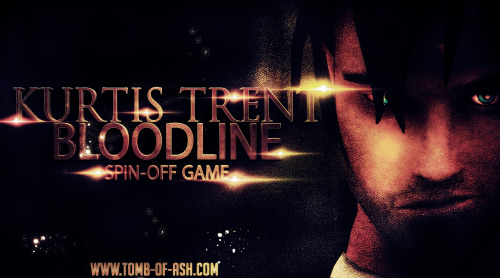 The name comes from Kurtis Trent’s realization of his ancestral legacy and the re-discovery of his inherited paranormal powers.

The story is a prequel to TR Next Gen.

He sleeps in the back seat.

Survives on the proceeds of crime.

He is running from his ancestral past – and present day demons.

Focal points of the game

The core of the game is based around search and destroy missions.

Focus on (in order of importance)

Kurtis Trent has the following abilities.

Use of psychic occult powers – for reconnaissance and object control.

World interaction – use of computers and machinery to produce a simple goal.

Enemies will have the following abilities.

Search for pick ups to replenish energy and weapons.

Search for enemies to destroy.

Kurtis must destroy all enemies in a room before the door unlocks and lets him continue.

Kurtis can open swing doors with a push

Kurtis can shoot out windows and jump through the hole

Kurtis can shoot out walls and vents at pre-defined points and jump through the hole.

Kurtis can be harmed by pre-defined zones placed in the room.

The story is presented using the in game polygon graphics.

The story is revealed in the twelve episodes that make up the game.

At the end of each episode is a short video that plays music, news bulletins and off the wall imagery. This is designed to reinforce the world of Kurtis Trent.

There is no introduction sequence.

The game starts and as the player plays the names of the characters are superimposed over the action.

Story is delivered in the following ways:

These triggers control the resulting animations.

A line of sight cone emits from the characters head. If Kurtis is within this cone the enemy character will react according to its trigger values.

Patrol paths are set by positioning control nodes around the room.

The direction and any incidental animations of the character is set on the node.

A scanner that shows the level map and paranormal hot spots.

Appears as a semi-transparent HUD map over the game world.

To use the map scanner:

Press the CROSS – (action) button to make it disappear.

These are inter-dimensional gateways that offer a window into past and future events.

Kurtis can witness actions from other times and receive messages from the past – and future.

While Kurtis can not step through, he can use his mind control powers to capture small non-organic objects and bring them into his dimension.

Time gates are scattered everywhere but are disguised as everyday objects.

To find and use a Time gate:

Scan the area for psychic aura.

When it is revealed the player stands in front of the Time gate and presses the CROSS – (action) button.

The Time gate opens and the Kurtis sees a third person camera view of the action.

To capture an object:

When the object is captured Kurtis is returned to the normal game mode.

Objects can also be thrown into the Time gates.

PSYWARE is the military term given to the paranormal abilities of the human mind.

This breaks down into two areas:

Out of body eye for reconnaissance.

Aura scanner. For detecting the paranormal.

Mind control of objects. Pick up, move and drop.

Psychic tap. Kurtis can drain the energy from humans to power up his occult energy reserves.

Area 2.           Occult powers are used for offensive and defensive attacks and draw their energy from the energy signatures of all living things.

Hold down the L1 – Psychic power

When a demon breaks through the dimensional barrier, the first thing it wants to do is enslave minions. It does this with a zap of power, turning the victim into a slave. These slaves can be used as assassins or cannon fodder, and spies.

Demons will camouflage their true shape for as long as possible, preferring to take the form of another creature.

Only when the host form has been rendered useless will they appear in their true demonic form.

Tracking – the investigation and locating of the demonic infestation.

Mortal combat – combat with the enslaved minions protecting their master.

Paranormal combat – containment and exorcism of the demon itself.

The game will take the format of a TV series.

Each episode has its own complete story and mission to be completed, although some missions and stories will span two episodes.

Key characters will appear in each episode, while some will only come back later on in the series.

Note: In-between each episode is a commercial break. Adverts, music videos and news bulletins are broadcast. Some may seem completely off at a tangent but all will create a feel for the kind of world that Kurtis inhabits.

L1 –   Hold down to combine psychic power with weapons and fighting moves.

Hold down to build up a stronger release of psychic power.

On screen charge bar will indicate level of power.

To steer the character in levitation mode use a combination of AL and AR:

The Kurtis character freezes and a ball of light leaves his body.

To steer the ball to a host body in the out of body mode use a combination of AL and AR:

Fly into the host body you want to capture and control. They will move using the same controls as the Kurtis character.

To direct the beam onto a host body use:

How to show which direction the enemies are coming from in a combat situation.

Referred to by Father Francis but only discovered at the end of the game.

Handed to Kurtis by his mother. This is not a happy family reunion.

Kurtis is bitter at his fathers absence and his mothers enforced exile from him.

The diary is not something he immediately values.

Game will use diary to provide background to enemy characters weaknesses.

Amulet that when Kurtis picks it up it burns a symbol onto the palm of his hand.

The tattoo will glow when occult danger is in the vicinity.

A rune covered stone pillar that when Kurtis encircles it with his arms burns a tattoo onto both forearms.

A horizontal beam of energy that cuts through Kurtis leaving a tattoo on his chest.

A headband with a carved rune on the front.

Burns into Kurtis’ forehead and gives him instant access to the Lux Veritatis archives of occult knowledge.

This onscreen power meter indicates the amount of psychic charge being used when the player presses the L1 – Psychic power button.

The diagram below shows the power scale.

The longer the L1 – Physic power button is held the greater the eventual discharge of energy.

If the player exceeds the safe zone limit and enters the danger zone then the eventual discharge of energy can have unpredictable effects on Kurtis and his surroundings.

These can be one of the following:

Dimensions are in meters.

Steps, stairs, walkways, doorways, windows, machines and furniture will all be built in metric scale.