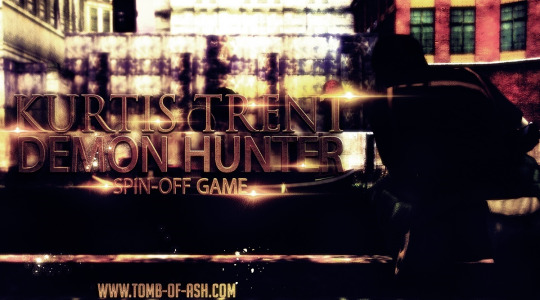 Murti Schofield, the writer for Tomb Raider: The Angel of Darkness sent us his notes on the proposed game Kurtis Trent: Demon Hunter.

THE GAME WOULD HAVE NO LINKS TO TOMB RAIDER. IT WOULD BE A PREQUEL FROM KURTIS’ EARLY DAYS WITH HIS FULL POWERS INTACT. IT WOULD BE ACTION BASED WITH MINIMAL PUZZLES, SIMPLE STORYLINE AND BE MISSION BASED.

Kurtis’ life is dogged by demonic forces popping up everywhere, even though he has abandoned his Lux Veritatis past. But he has no hesitation using the abilities developed during his early training. He cannot deny his upbringing or his destiny.

ASSETS: Kurtis is highly adaptable to many situations.

We can give Kurtis a huge variation of abilities, all with their inbuilt weaknesses. His present ‘Angel of Darkness’ skills are:

A shadow beast/hell hound is constantly on K’s trail and pops up in all kinds of unexpected situations whilst K is exploring or even battling some other baddy.

AN ANCIENT BATTLE SCENE WITH LUX VERITATIS BLADES AND WEAPON OF LIGHT DEFEATING THE POWERS OF EVIL.