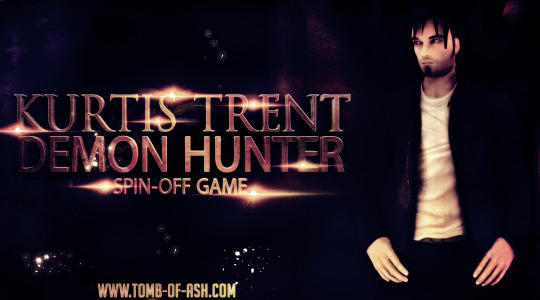 Murti Schofield, the writer for Tomb Raider: The Angel of Darkness also sent us his notes on the proposed game Kurtis Trent: Demon Hunter.

THE NEXT GAME – KURTIS

THREE ALTERNATIVES FOR THE NEXT GAME:

1.    Kurtis goes completely solo. ‘Kurtis Trent Demon Hunter,’ or some such, and there would be no sign of Lara.

3.    Lara has disappeared and Kurtis plays the opening levels tracking down what has happened to her.

In going solo Kurtis moves into Lovecraft territory, Cthulthu Mythos, Hellboy, John Constantin’s Hellblazer, Clive Barker. We already have a wealth of background for Kurtis that can be expanded on from Game 6, much of which will be on the website.

With Kurtis going solo there would be no attempt to recreate Tomb Raider but to break entirely new ground, come up with something as unique and powerful in its own way as TR was back in ’96. Because Kurtis and Lara shared pixels in Next Gen some details have to be adhered to but basically the sky is the limit.  We can expand on the special universe he inhabits, the unique abilities he has, the exceptional dark forces he gets to put down.

The K-game would not be as dense in story material but much more linear with  action driven game play.

The second game of this story arc/cycle could use some of the elements in Next Gen, such as the THE CABAL, the NEPHILIM, the LUX VERITATIS histories. All or some (or none) of the story clues deliberately left in the first game could be picked up. How Kurtis survived after Castle Kriegler could be revealed in flashback when Lara returned at the end of Game 6 and found Kurtis still alive (barely) in the ruins. This would be a rich vein of established material to use. Or it could be all entirely new and we could delve into the dark side of Kurtis’ past as reluctant Demon Hunter.

The story line could be linked to the disappearance of Lara  or totally separate from her involvement where Kurtis gets caught up in forces triggered by his family links to the grim and the grotesque.

It could begin with Kurtis on a ‘mission’ slugging it out with other mercenaries in a remote desert region. Unexpectedly a series of grisly, daemonic events occur and Kurtis realises that, once again, the occult has intruded into his life, just as it used to in his Foreign Legion days (like Predator where a team of grunts are up against something in the jungle they could never have guessed at).

Despite turning his back on his Lux Veritatis upbringing, changing his name, joining the Legion etc, the occult chaos of the shadow worlds constantly broke into his life, as if he somehow attracted it. And this time it looks more intent than ever on killing him.

He always fought to deny his inheritance and kept his head buried in the sand until the murder of his father by the Monstrum/Eckhardt  (in Game Six). After this he became heavily involved with Lara combating the insane Black Alchemist Pieter Van Eckhardt and the Nephilim. He narrowly escaped death in Castle Kriegler and returned to his gun-for-hire profession hoping to avoid further entanglements with the occult. Not a chance!

When Kurtis tries to get in touch with Lara she has mysteriously disappeared. Strongly suspecting his previous employers, The Cabal, Kurtis sets out to track down what happened to her using his contacts within the professional underworld.

And somehow it is all tied up with Lara’s disappearance (or not if this is Kurtis going it alone).

Kurtis must delve deep into his Lux Veritatis past to combat the forces ranged against him. As a Lux Veritatis initiate he has access to skills and realms of knowledge not available to everyone. He must finally take up the mantle of the ancient Order to do battle with the Nephilim who are intent on completing the forces set in motion by Eckhardt to bring about the New Age of their race.