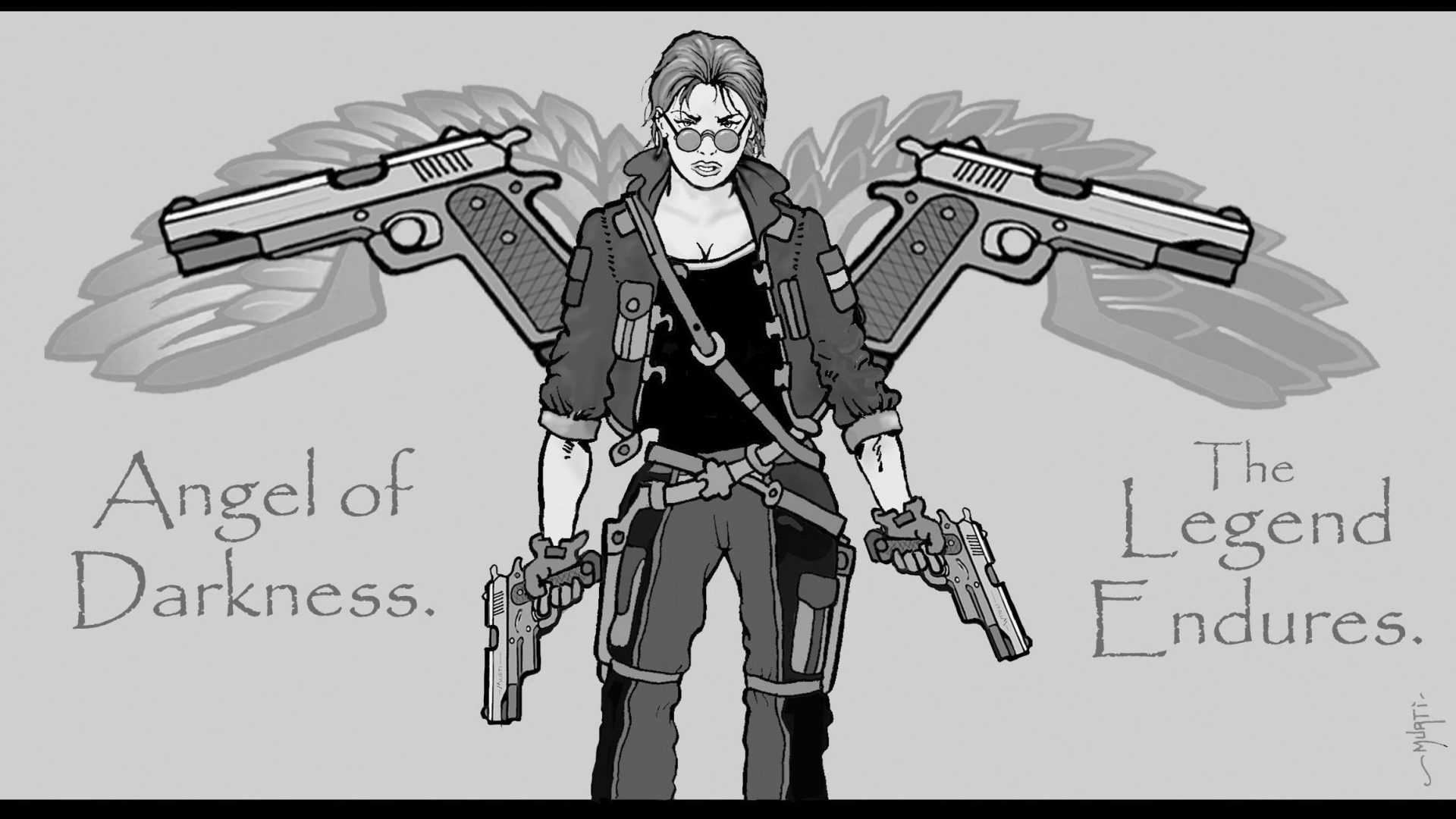 The Comprehensive and Uncut Plot for Tomb Raider: The Angel of Darkness

Dated 10th of July 2001 this document offers the most complete story progression through The Angel of Darkness before it was all cut. This document also includes a completely cut section of Castle Kriegler.

This was previously published elsewhere but without author’s permission. This time we’re publishing the document WITH such permission as we strongly believe it is a right thing to do.

We highly recommend you to visit our The Angel of Darkness section, Kurtis Trent Spinoff Game section and visit Tomb Raider: The Dark Angel Symphony.

Open up on a Jackal headed walking stick, Von Croy’s room badly smashed about, scenes from Egypt, Lara with a mysterious desert Shaman, ugly daubings on a wall, an alchemical symbol. We see the Shaman give Lara an Amulet. Lara gets chased through dark streets by police, loses her backpack to dogs.

1/ A BACKSTREET COURTYARD – dark, angular shadows, rainswept – film‘Se7en’. The TRAINING AREA where the SHAMAN and AMULET icon are introduced. Whenever Lara attempts some new task she can choose to enter the training zone and take advice from the Shaman.

1a/ She gets out of the courtyard and is chased by police into an apartment and up onto the rooftops.

**LARA ADDS HER OWN NOTES TO VON CROY’S NOTEBOOK** She can refer to this throughout the game. On occasion we can hear her read from it.

4/ ON THE STREETS – Lara talking to various street characters asking for Louis Bouchard. Can take various approaches – F (friendly) or U (unfriendly). Some lines of enquiry will also trigger a C (context) linked response. She finds out that;

4a/ Lara can also have exchanges at various shops and premises including pawn shop, a news kiosk, a general store, an apothecary and an antique shop. Can purchase health items.

4b/ If Lara comes across the OLD CHURCH at this point she finds a gym on the ground floor. Can make a wager with the trainer to beat one of he heavies sparring in the ring. Win and you get the trainer’s gold watch. Lose and you get bruised.

ROUTE B/ Meets an Old Geezer who worked at the old club, ex-janitor.

ROUTE C/ Uses a pawnbroker to raise cash for bribes.

5a/ ROUTE A/ – Lara ends up in a Café and meets owner Pierre.

5b/  ROUTE B/ Meets an Old Geezer, ex-janitor at Le Serpent Rouge.

5c/ ROUTE C/ Uses a PAWNBROKER to raise cash – pawns the things found in the opening level courtyard or elsewhere. (It’s Daniel Rennes the Forger, as we find out later. Totally paranoid dude.)

NB If Lara takes the wrong tack with Bouchard he whips out a hand cannon and kills her on the spot. Well…you know…he’s been under a lot of pressure lately.

7/ THE FORGER – DANIEL RENNES’ AT THE PAWNBROKER’S.

8/ On the barge she superimposes maps of the city sewers, the Louvre archaeological dig and the security layouts to find a way in. Von Croy’s notebook says the painting is inside one of the buttresses in the recent dig. There is a weak spot between two walls she might be able to break through with the right explosives.

(See chart ‘Lara in the Louvre’)

Lara’s route to the archaeological dig lies through the publicly available BUTTRESS SECTION. This and the upper galleries and offices are a STEALTH PRACTICE AREA. She must get up into the modern Louvre section which is full of alarms and guards. However badly Lara manages by setting off the alarms NO POLICE arrive in this section. If alerted all the guards do is lock themselves away in their control room and create hindrances by closing automatic doors and corridor shutters. As Lara only has stealth equipment she deals with the guards by knocking them out, not killing them.

10a/ Lara’s route lies past MARGOT CARVIER’S OFFICE. The office has a computer terminal providing an opportunity for some necessary background information:

Lara also picks up a security pass in Carvier’s office to help reach her destination.  The route takes her via the roof and through vents which access the lower levels where the archaeological dig is found.

This area is separated from the public.

12/ GETS THE PAINTING – Solves the puzzles:

Lara climbs down inside the Buttress negotiating protruding and recessing stone slabs set in the walls. At the bottom she enters:

However well or badly Lara manages the alarms in this section THE POLICE arrive.

GETTING CAUGHT – If Lara gets captured she is confined in a store room. She can escape from here using only what is in the storeroom. A prompt in Lara’s voice will help in situations where the player might be struggling

Cut-scene: we see the stranger/Kurtis heading for freedom with the painting. Lara dashes round the corner, sees Kurtis out cold on the floor. She bends over him to check on him. She gets knocked out too. (This is a chance to remove any items from her backpack inventory that we want her to lose.)

From Lara’s blurry POV we see the figure in guard’s uniform in a tracking shot, as he strides off with the painting. Without breaking stride the guard goes behind a pillar and emerges on the other side as the more distinctive of Bouchard’s thugs we have seen earlier.

Weird alert! (The assailant is Shapeshifter in security guard’s uniform.)

Weird alert! This is the first clear Sh’shifter signal. Any others so far have been much subtler i.e. ShapeShifter’s telltale Nephilim sign during the game are swirls on his skin. When he appears as a normal Parisian citizen the signs are there but subtle, ooh subtle.

[Later on ShapeShifter as Karel always wears gloves – to hide his swirls.]

16/ Lara comes to to find Bouchard slapping her awake. No sign of Kurtis.

NNB. Lara being unconscious is a good opportunity to remove any items from her backpack/inventory that we don’t want her to have later.

Bouchard delivers Lara to Von Croy’s apartment and waits outside in his car. (Bouchard has the Louvre painting in the car boot passed on to him by Sh’Shifter posing as one of his own men.)

[Hopefully, if anybody bothers to think about it, Bouchard has been got at since he last had dealings with Lara. Poor thing, his men are being brutally killed, his operations are shut down. It’s been a tough time all round and he’s obviously been made an offer he can’t refuse either by a member of the Cabal or even Eckhardt himself.]

18/ INSIDE VON CROY’S APARTMENT – Lara searches the third floor apartment for the Obscura Engravings from the Louvre. The place is a mess recognisable from the OPENING CUTSCENE.

The events and images seen this time are more detailed showing Lara and Von Croy arguing. Lara snatching at a fax page Von Croy is waving about. He’s gesticulating wildly with a gun, clearly out of his head with fear. Gunshots – Von Croy clicking on an empty gun. The gun goes spinning under a heavy piece of furniture. Lara glimpses a face of someone stood behind her in a mirror. She gets hit from behind. Fade to black, the SYMBOL dripping gorily on the wall – CRASH!

23/ Lara asks what he knows about the Obscura Paintings.

24/ Lara goes through the building – finds all kindsa useful Russian Mafia stuff. She can stock up on ammo, medical stores etc.

25/ In one of the more remote rooms she comes across Bouchard’s torn, bloodstained jacket containing his wallet and ID.

26/ THE STRAHOV– the massive complex run by the Cabal.

27/ LARA HEADS OFF TOWARDS THE VAULT OF TROPHIES. WHILST EVADING GUARDS AND INTERFERING WITH THE SECURITY SYSTEMS LARA CUTS OFF POWER TO CERTAIN AREAS. WITHOUT KNOWING SHE ALSO UNLOCKS THE HI-SEC HOLDING ZONE AND SETS THE PROTO-NEPHILIM LOOSE IN THE LABYRINTH.

NB – THE PROTO–NEPHILIM is an experiment of Eckhardt’s that went wrong. It’s been kept locked away. It’s vicious and powerful. And now it’s out and it’s good at hunting in the dark! It goes on a rampage around the levels killing guards and intruders alike. But Lara doesn’t run into it. Kurtis does later on.

28/ Lara runs across some members of the Cabal – Eckhardt, Boaz, Karel, Gunderson and Rouzic the Illusionist. It’s our first view of the scary nutters.

*Note on Bouchard:- he may turn up strapped down on a table somewhere in one of the medical cells awaiting evil attention. But the Proto-Nephilim gets him. Yeah! TO BE DECIDED.

Lara enters a different part of the complex, an area of botanical experiments and highly convincing scary bio-mutants. The PROTO-NEPHILIM klaxon/strobe is still sounding/flaring.

30/ As she enters the chamber Kurtis appears (on the outside, seen through a bullet proof window) and locks her in.

32/ Lara has calmed down and figured that the Shard is important to Kurtis. No way is she just going to hand it over. And she has the map of the Strahov.

33/ Kurtis gives Lara a brief background to his involvement with Eckhardt, his dad being the last Lux Veritatis killed by Eckhardt. It’s revenge time.

34/ THE VAULT OF TROPHIES and ANCIENT ALCHEMIST LAB COMBINED.

OTHER POSSIBLY AVAILABLE HERE OR IN OTHER ROOMS IN THE STRAHOV:

Info on Eckhardt’s pact with the Nephilim.

Eckhardt notes/journal on meetings with the Nephilim and betrayal of the five alchemists of the early Cabal in 1400’s.

The nature of the Nephilim, what they are, the fading race, their appearance etc.

36/  KURTIS FINDS THE SYMBOLS HE NEEDS

CUTSCENE – in some unspecified part of the Strahov we see Kristina Boaz talking to another of the Cabal, Joachim Karel.

43/ KURTIS AT THE BORDER– PLAY KURTIS.

Kurtis is banged up in a guards’ shed or van.

THE FINAL HOURS AT THE CASTLE BEFORE ECKHARDT ESCAPED WERE NOT AS KURTIS HAD BEEN TOLD. HE SEES THE LAST LUX VERITATIS GUARDIAN, HIS GRANDFATHER, TAKING TWO OF THE PERIAPT SHARDS AND ESCAPING WHILST THE ALLIED BOMBS DEMOLISH THE CASTLE.

ECKHARDT ESCAPES THE MAYHEM HELPED BY MEMBERS OF THE CABAL (or just one of them – Karel?) AND TAKING THE THIRD AND LAST SHARD. IT HAD NEVER BEEN LEFT IN THE RUINS AT ALL. ECKHARDT HAS HAD IT SINCE 1945.

45/ Kurtis comes out of his trance to find Eckhardt standing over him triumphant and eyes a bit mad and starey like. Kurtis’ Shard has been snatched by Eckhardt’s cronies. Eckhardt now has all three Shards. Shit!

One of the Cabal, Joachim Karel, approaches Lara. Says he needs her help to stop Eckhardt because the Alchemist has become treacherously unstable – he killed Boaz, one of their own. Karel fears for his life – (that’s his story anyway).

A/ some insane RITUAL to transform himself into a more evolved being.

B/ breeding the Nephilim race again by interbreeding with humans.

* THE FINAL RITUAL HAS YET TO BE WORKED OUT IN DETAIL BUT THERE WILL BE MUCH ALCHEMY, WATER, HOST BODIES(?), WEIRD SHIT AND EXCITING THINGS INVOLVED.

50/ The rest of the Cabal think he’s going to reward them with longevity.

SOME SUGGESTED IDEAS FOR THE FINAL RITUAL AND HOW TO SABOTAGE IT:

We see Eckhardt and the remaining Cabal members assemble. Everything is ready for his big transformation.

1) Eckhardt transforms into a grotesque form and collapses.

3) The other members of the Cabal disintegrate.

53/ Lara comes up all dripping and wet from the pool to find:

Eckhardt is physically a wreck. He has taken refuge in the final chamber on a huge triangular throne style arrangement between two massive Nephilim pillars. Though physically screwed he has one last resort, the incredibly boosted mental abilities by which he can create dangerous realities from Lara’s past and try to kill her in them – Nightmare On Elm Street style.

What we had before was:

Don’t forget to get your copy of the remastered music from the game at http://shop.trdarkangel.com