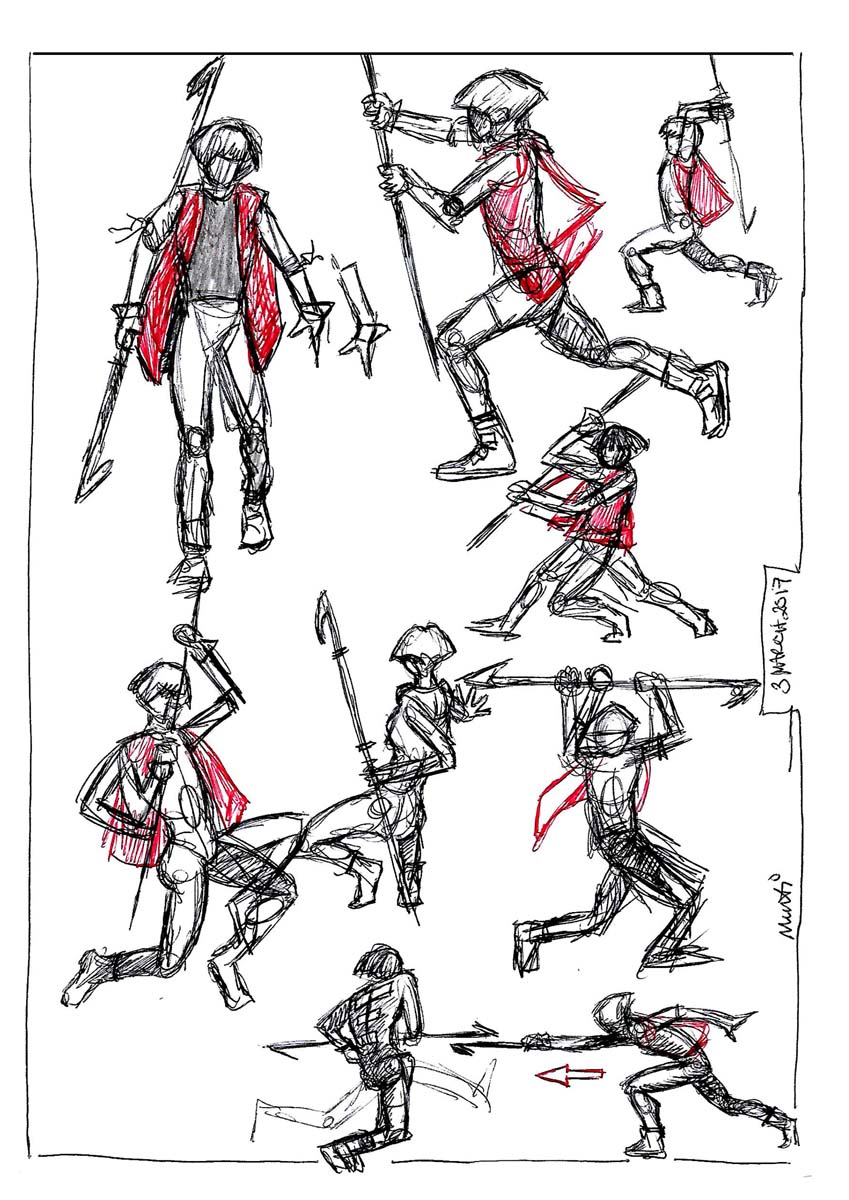 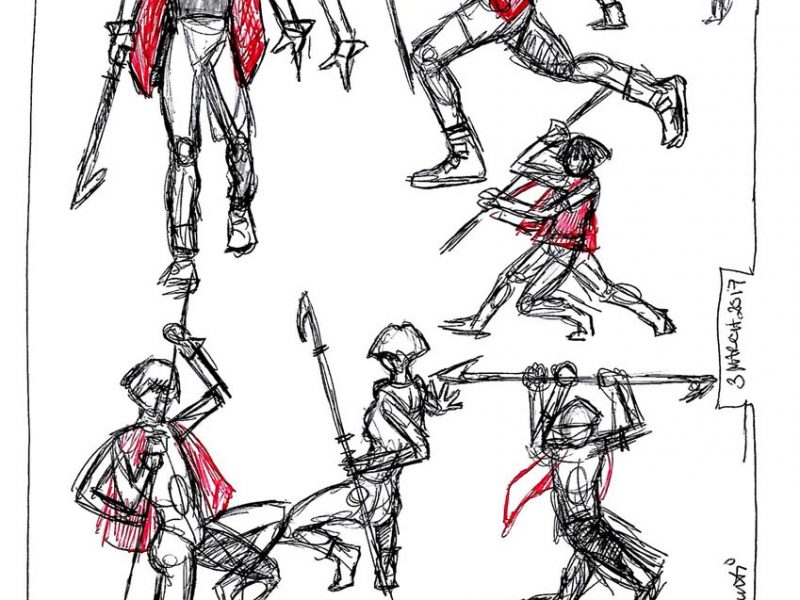 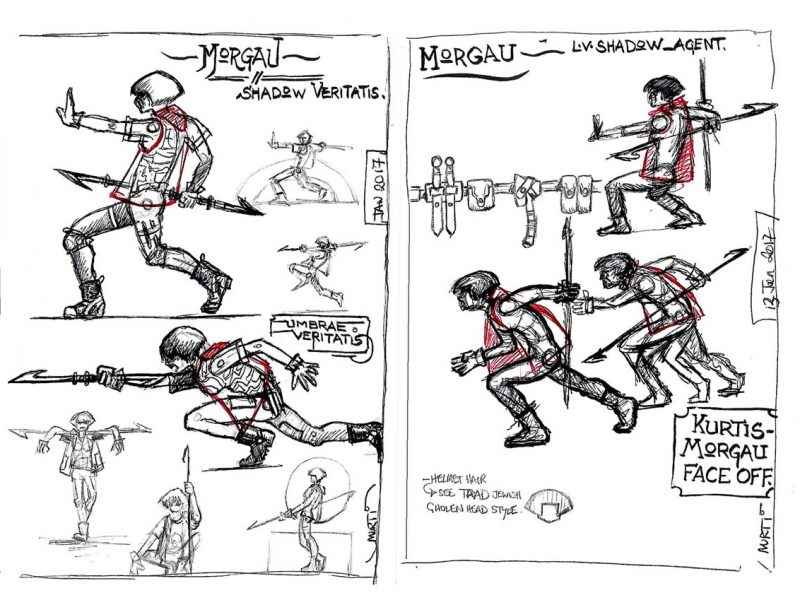 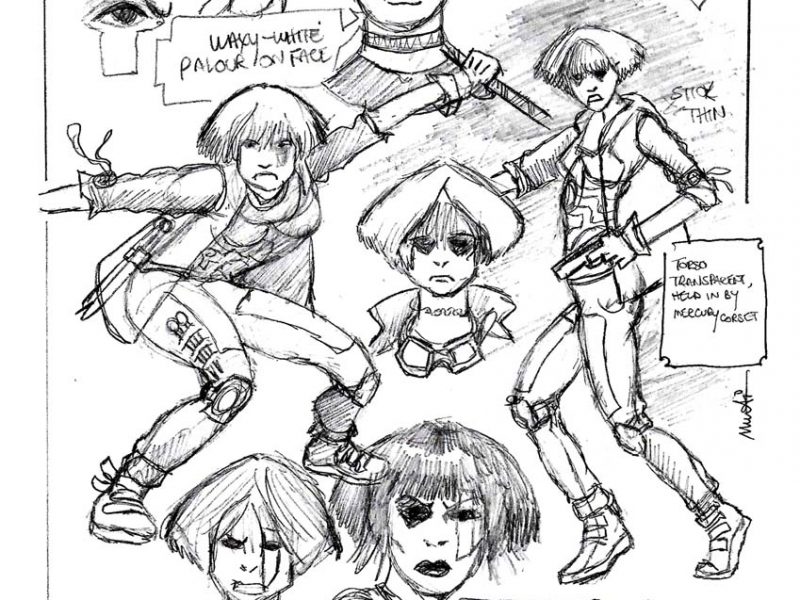 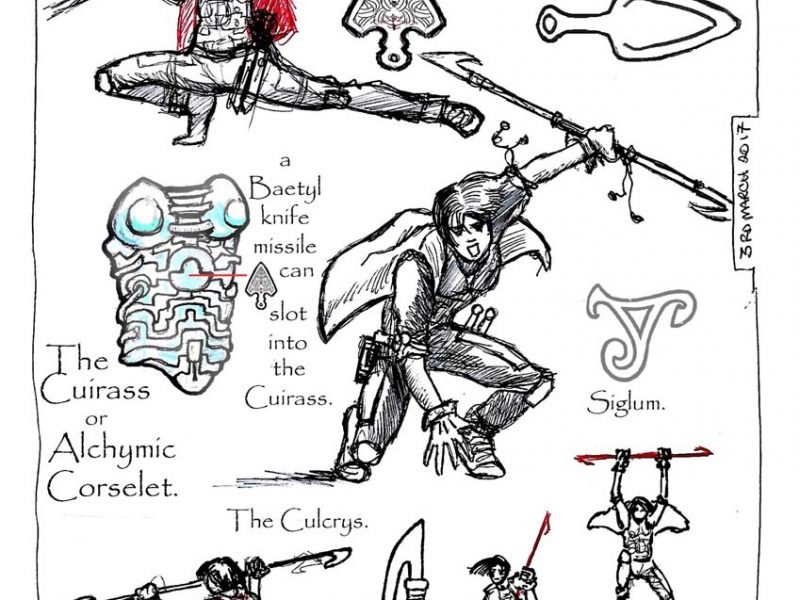 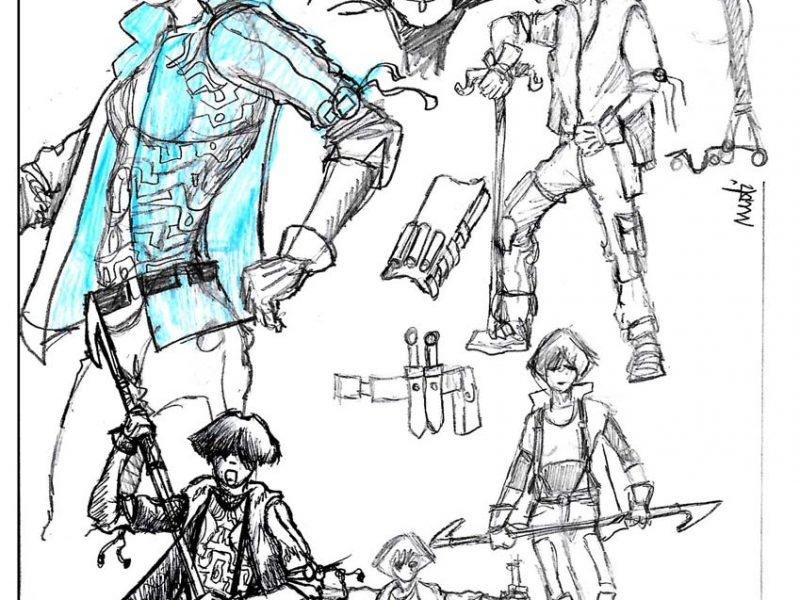 We continue to publish exclusive Angel of Darkness documents from Murti Schofield, the writer of the game. This one reveals more details about Morgau Vasiley, one of the planned characters from the game.

–     Beneath the protective Cuirass Morgau’s torso is semi transparent. Her internal organs are partially visible, a side effect of the alchymical vivisection she underwent under Eckhardt.

–     Essentially her body is at war with itself.

–     She is totally dependant on specialised elixirs and essences that maintain her incredibly enhanced life force.

–     Though thin limbed and of a pallid white complexion her body is incredibly strong, in part due to the carbonite threading woven throughout her entire skeletal structure.

–     Her arms are thin with semi-translucent skin showing blue veins.

–     Morgau’s spine is welded to rows of wiring, bone & silver rods, an ugly arrangement which leaves the heads of rivets & tiny plates exposed along her spinal column.

–     Her eyes are opaque milky blue until the irregular psychic abilities kick in when they become translucent.

–     Periodically Morgau’s body displays an alarming tendency to erupt into grotesque semi-crystalline, metallic extrusions. [reference  the growths on Bouchard’s badly injured man in Paris]. Only the Cuirass helps keep this in check.

–     She is not strictly speaking a cyborg, in fact her reliance-relationship to her Cuirass is more that of a mutual parasitic dependency.

–     Her need to ‘replenish’ is almostvampyric. Almost.

–     The truth is that she has not been entirely human for a while [see notes on Eckhardt’s Nephuman Meta Progeny and Warrior Sentinels.]

–     In combat Morgau displays a terrifying stillness, the ‘awful tranquillity of the wolverine focused on its prey.’

–     Some of her more esoteric abilities are inbred as a natural descendant of a Lux Veritatis bloodline. Others have been brought to the fore as a result of the awful treatments she has undergone at the hands of the Black Alchymist.

–     The Culcrys is one of the Iren Waepn armaments which include the Irenscild, the Iren Folm and even the Chirugai series. [NB there are a limited number of other Chirugai apart from Aiyessu which is attuned to Kurtis Trent.]

–     Knife missile or Excision Blade – basically a Baetyl stone that can be controlled by telekinesis. It is an arrow-head shaped artefact. Ferilium.

–     [see additional list of possible powers available or unlocked at a later stage in Morgau’s evolution i.e. in further Games.]

–     Eckhardt’s body is held together by a metallo-ceramic mesh cuirass – the waistcoat we glimpse beneath his flare coat. This Cuirass needs constant replenishing in order to maintain his physical continuation.

–     Morgau is also dependant on a cuirass or corselet-prosthesis to maintain both her life and the notoriously unstable physical powers she possesses. Eckhardt’s cuirass and hers differ but operate on similar Alchymic principles.

–     Eckhardt, as the Monstrum, must harvest alchemically pure bio-elements to repair and renew his physical state. Morgau has been constructed to be dependant on specialised elixirs & essences of Alchymical derivation.

–     The Cuirass is a form of armour but this is not its main function. The vital bio-essences are administered via the Cuirass through a network of tubing built into the armour casing.

–     Morgau can only have access to these essential elixirs via her Cabal controllers. [though this situation changes in Game III or in the Kurtis spin off game when she experiences a radical transformation and allies herself to Kurtis in order to reform & recruit for the newly nascent Lux Veritatis.]

–     The Cuirass is highly flexible, more like a mail-link series of plates and tubing than a solid object.

–     It is constructed of prima materia metals, mercury amalgams and carbonite threading.

–     Morgau’s endless rage at the brutality & injustices of her incredibly perilous life is masked beneath a deceptively placid manner and frail appearance. [See note of the dangerous ‘stillness’ and tranquillity of her combat demeanour.]

–     Her upbringing, as an LV descendant on-the-run has engendered a finely honed paranoid attitude to everything in life.

–     From an early age she has proven to be of a mercurial temperament, rebellious and wilful. This trait appeared to become accentuated by her unstable upbringing and the effects of a serum given her by her father.

–     The effects of the vivisections & Nephuman adaptations performed on her by Eckhardt has turned her into something not entirely human and her rage at life and all who oppose her is a terrible force contributing to her general instability and unreliability. She is a danger to all around her, slave-owners, foes and allies alike…although she would never acknowledge anyone as an ally.

–     Morgau was slaved to work under Boaz for a while in the Cabal before being loaned out to Gunderson.  She learned all she could about the Gothic vivisectionist and had her marked out for an especially detailed vengeance. This was thwarted of course when Boaz was fed to one of Muller’s mutant podosaurs – The Pod.

–     Karel considers Morgau to be a Shadow version of Lara, a strategically valuable and biddable living weapon.

–     Morgau’s Siglum or Arcanum is an esoteric symbol, a highly personalised glyph of power; an arcane signature. It is also an identity anchor for an unstable individual struggling to maintain a sense of who she is.

–     Morgau once attempted to use the Chirugai, when she was working close to Konstantin Heissturm, but although she was able to awaken it the LV artefact did not respond to her control. She was not sufficiently attuned to its harmonic operation. She was lucky it didn’t kill her, as it was set to eviscerate anyone attempting to misuse it. Her Lux Veritatis lineage and training was all that protected her from a savage mutilation. On this occasion she barely escaped with little more than a sever scarring.

–     The search for the Mayan Genome Sequencer is something of a personal quest for Morgau. She has been told it could be a way to unravel the dreadful genetic damage done to her by Eckhardt. If it exists it might be a way for her to reclaim something of her misplaced human nature and normalcy… if it exists!

–     Morgau has her own network of ‘Irregulars’ built up when she was working as a free lance in her early independent days. They are all outcasts, exiles, freak heads, rogue personalities, wild cards, outsiders, unemployables and pariahs …named Crypsis, [other various names are listed elsewhere]. Typical T-Shirt = “From Chaos, more Chaos”.

–     Uber-mentat…Morgau has abnormally acute instincts when it comes to codes & patterning. She is able to discern disparate connections, meta-links and sequencing veiled from other, less astute minds. She worked as a security advisor for several illegitimate corporations at one stage.

–     Lilith – a name imposed on her by Eckhardt – but she never submits to this offensive designation. Capitulation is not in her nature.

No one has yet seen the full Chirugai weapon displayed or been able to master the full range of its diverse capabilities, not even the current Heissturm custodian.

Apart from its controlled flight and multiple blades the weapon’s potential capabilities can be enhanced by the addition of quartz-like attachments slotted into key parts of the weapon. These small slotted rods, or Catriches, unlock further weapon capabilities, in keeping with the user’s level of psychic skill.

In Game II or III Kurtis discovers a cache of LV Catriches which change the configuration of the Chirugai and transform it into an even more deadly weapon.

When in the possession of Konstantin Heissturm the Chirugai was stored in a specially constructed weapons cask or Vasculum. This was only when not in use. The Vasculum is distinct from the side-satchel Kurtis sometimes uses when carrying the weapon discretely i.e. in public.

in which the Chirugai is discovered held captive by three ponderous chains. It thrashes and tears at its restraints as soon as any adept, LV or Cabal, approaches. 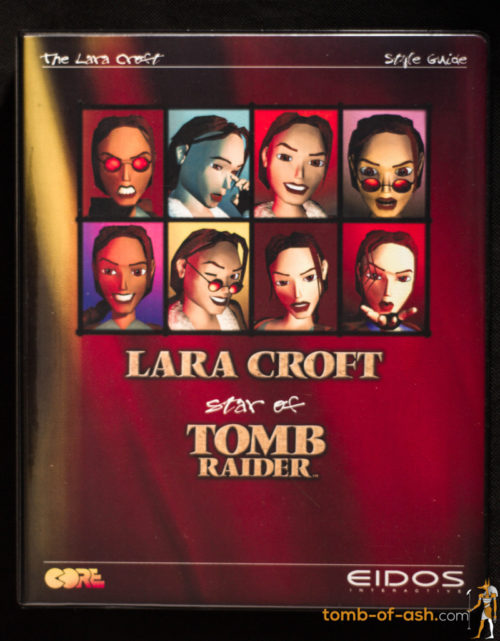